The arrival of a former WW2 air raid siren at the Museum prompted some questioning about air raid sirens in Riverstone. We have assembled what information we could find, but are interested in any further information or photos that people may have to share.

In 1995, Joyce Wood, whose father, Hugh O’Kane, was the Chief Warden in Riverstone, recalled: When notified of an air raid or practice, the air raid siren was activated from our home (9 Oxford Street Riverstone). The siren was located in Garfield Road on a telegraph pole between what was recently an antique shop and Dr Rose’s surgery.

The following 1942 newspaper item from the Windsor and Richmond Gazette explained to residents what the various air raid sounds signalled. 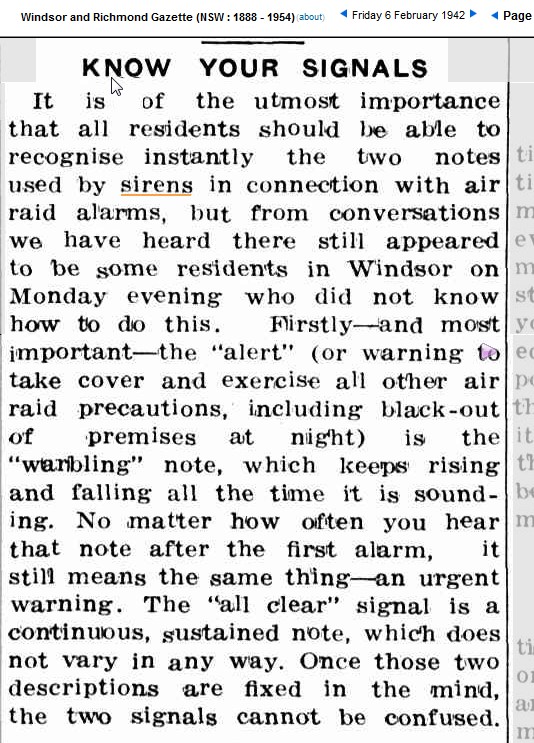 After the war National Emergency Service air raid sirens were supposed to be returned to the Department of Public Works. Some local fire brigades requested through their local council that the sirens be donated for the purpose of signalling a fire or emergency.

Although no longer in regular use, the siren can still be seen on a metal tower behind the current Brigade shed at Schofields, as shown below in the photos taken in March 2013.

Another siren in Riverstone.
Clarrie Neal recalls that when his family purchased a house at 13 Brisbane Street, Riverstone there was a pole attached to the top right hand side of the house with a small horn attached. This was a former air raid siren operated by Ron Allen, who was a Warden during the war. Unfortunately the siren rusted away over the years and was disposed of.