Mrs Jean Dunston (Gosden) and Mr Norman Brown are cousins who lived in Edward Street, Riverstone when they were young, and have fond memories of Riverstone in those Old Days.

There were no tarred roads in 1926 only corrugated dirt roads. My father Sid Gosden was one of about six car owners in Riverstone at the time, others were Mr Stanford and Mr Dawes.

The Gosdens came to live in Riverstone in 1926, living in a slab house at the back of the sawmill in Edward Street. The Sawmill was owned and operated by Sydney Gosden and his son Max and son- in-law Noel Dunston, and was started during the war years. As petrol was very scarce, they used to start up the old International truck with petrol and then switch it over to a charcoal burner, which was on the running board on the side of the truck.

Laurie Mould’s mother had a fish and chip shop opposite the old picture theatre, and also trained trotting horses. Her son Laurie carried on the training in her footsteps and was very successful.

Mrs Blair had a Confectionery shop opposite the chemist shop in Garfield Road which was later sold to Trevor Edwards’ mother.

Charlie Knight owned the “Cash & Carry” store opposite the Railway line, where the Motor Spares shop is now.

Charlie Cafe’s mother used to board all the butchers who worked at the Meatworks when ‘solo’ butchering was carried out.

Old Mrs King of Bourke Street was well known for her lovely flowers, and whenever there were flowers needed, you could always purchase a bunch from her.

Our first memories of a Doctor were firstly Dr Rich, then Dr Lappin followed by Dr Boag who lived in the old Doctor’s residence in Garfield Road opposite the present Doctors’ rooms.

The first Estate Agent and Auctioneer was Ambrose Driscoll, an old identity who lived on the corner of Garfield Road & Pitt Street. The business is still carried on today as Driscoll & Reid, Estate Agents, in a new building on the opposite side of the road. 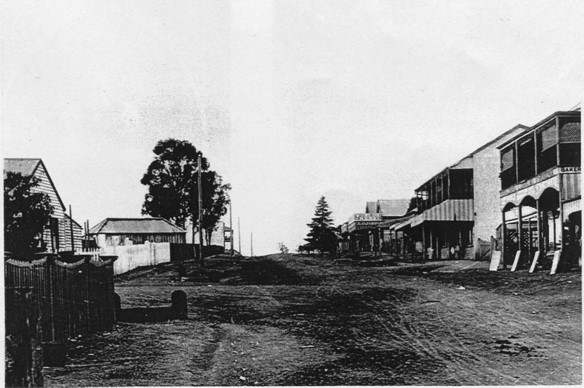