The Olympia Picture Theatre at Riverstone -photographed late in 1932. No electricity power poles or lines connected at this early stage. The protruding projection room above the corrugated iron slanted awning stands out, as does the flagpole at the right of the photograph. Mr. Raymond Kennedy Murrell or “Charlie” Murrell as he was called, was at that time the owner of the Theatre, having bought it from Mr. Robert Lindsay Harper in 1926. Mr. R. L. Harper had built this up-to-date Picture Theatre on the site in Windsor Road, [later Garfield Road] which was completed by the builder, Mr. J. Donaldson of Harris Park, Parramatta in early November, 1920 and opened for public entertainment on Saturday 20″ November, 1920 with ”Marriage” a film from the Fox Film Corporation starring Catherine Calvert in the leading part Promptly at 8 o’clock the Olympia Orchestra struck up the National Anthem and the crowded house rose to their feet. The pictures went through the machine most successfully, and to the approved and satisfaction of a thoroughly appreciative audience. Moving Pictures were shown at the ‘The Olympia Pictures” or “Olympia Picture Theatre” as it was known, every Wednesday, and Saturday. 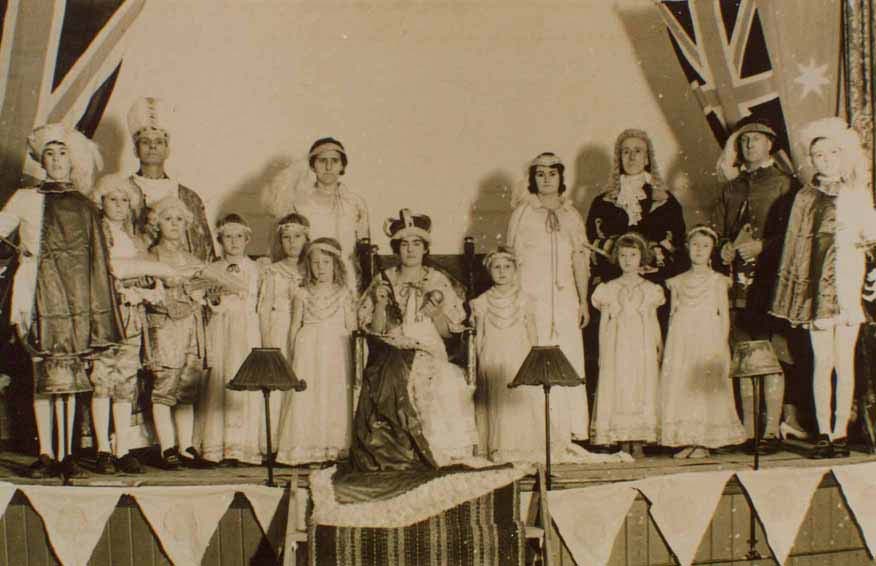 “Queen of Riverstone” crowning ceremony, which took place in the Olympia Theatre at Riverstone on Saturday 23rd June, 1934, during “Back to Riverstone Week”. Her Majesty The Queen [Nancy Strachan] is seated in the centre of the Royal Party on the stage wearing robes and crown. The hall was filled to capacity for this historical occasion. “Back To Riverstone Week” was to mark the turning-on of the electricity supply to the town for the first time. There was great rejoicing throughout the town when motor horns tooted, the fire bell clanged, and the sirens at the meatworks screeched noisy congratulations. The banquet was followed by varied entertainment such as a Baby Show, the crowning of the “Queen”, a Carnival and Ball.
Her Majesty the “Queen of Riverstone” [Miss Nancy Strachan] in the centre of the stage, flanked on both sides by Princess Maud [Mrs Maud Stockwell, left] and Princess Beryl [Miss Beryl Jarrett, right], and between the Union Jack and Australian Flags. Others of the Royal Party are:- Two Trumpeters on either side of stage [Neville Waters and Jim Fitzgerald], The Herald [Mr L. Rosenthal] standing next to the a Trumpeter on the right side, The Chamberlain [Mr. Nelson Andrews] standing third from the right in back row, The Courtiers [Misses Joyce Wood, Elsie Schofield, Gwen Stanford and Mrs Gwen Hillier] .His Grace the Archbishop [Harry Moore] is positioned third from the left in the back row. Two Pages [Fred Dench and Cliff Conway] holding velvet cushions are standing next to a Trumpeter on the left in front of the Archbishop. Two Train- Bearers [Pat. Conway and Norma Clarke] positioned with the Courtiers at front of adults. 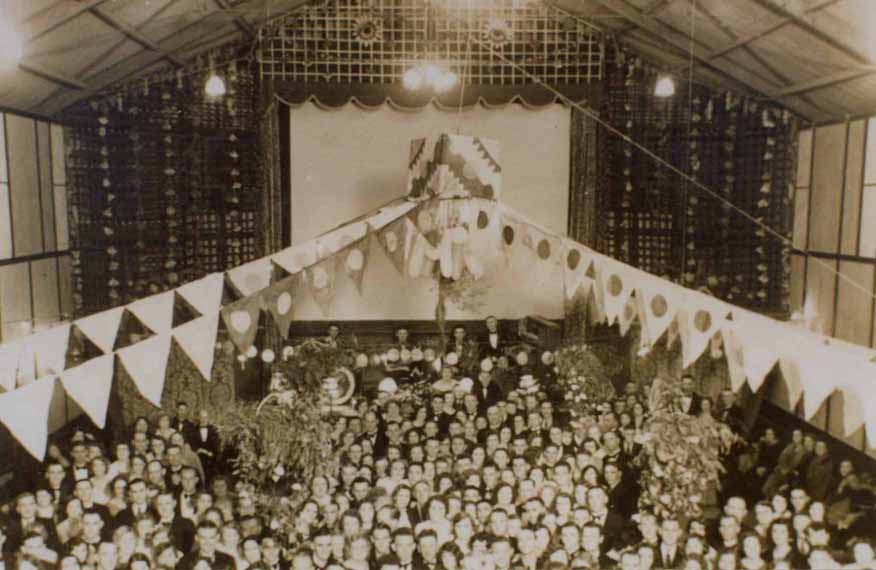 With the electricity supply switched on in the township, the Olympia Theatre was the venue of the “Back To Riverstone Ball” which was attended by 350 people, continuing through until 3 am. Saturday morning. This photograph shows the crowd at the “Ball” in the Olympia Theatre on Friday 22nd June, 1934. Herb Freeman’s band is seen in the background. Note the Plaster / fibrolite screen which was installed in the 1930s, and would remain in place until a CinemaScope screen was installed in early 1957, when Mr Neil Murray took over the management and running of the Theatre. There is a fringe above the screen. Also appearing in this photograph, is the latticework with decorations. The opened floral type curtains extend to the stage floor and there is a fringe across the top of the screen. The latticework that Mr Murrell introduced to the theatre, is at this stage, on both sides of the stage and above the screen area. The original ceiling is in place, and it was not until May, 1949 before Mr Murrell made application to have a new ceiling fitted to the theatre, with some latticework included. The hanging candlelabra lighting can be seen in the centre of the Theatre, and with the electricity supply now connected appeared much brighter. Later, when the new ceiling was built, there were two hanging candlelabra lights in the centre of the main hall and three lights in the Dress Circle.

The shop in this mid 1930s photograph is the main subject of this frame, and was situated next to the Olympia Picture Theatre on the eastern side. The shop was owned by Horace & Phillip Barnbridge, who continued to own the shop until 1949 when it was then owned by Carlisles Pty. Ltd. After having the shop for seven years, Carlisles Pty. Ltd. disposed of their business to Mr Roy Cooke during May, 1955. The grocery store was yet again disposed of in 1958, when Mr Neil Murray bought the store. Today, it is the Riverstone Fruit Barn and owned by Pasquali Monteleone. Although, in the photograph, there is only a part eastern-side view of the Theatre, it shows the 12 foot [3.6 metres] pitch of the corrugated iron roof the flat sheets of fibrolite, a window, and the weatherboards up to the height of 5 feet [l .5 metres] from ground level. 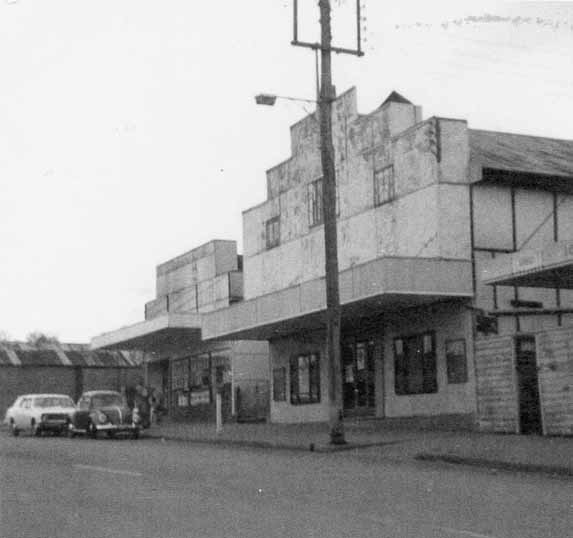 Looking east across Garfield Road, stands the Olympia Theatre in early 1972. The four showcases at the front of the Theatre are empty, and some other form [other than movies] of advertising is displayed and visible on the front glass door. The facade is stained and in need of a paint-job, as does Neil Murray’s [MFC Store] adjoining shop [Previously owned by Cooke’s]. Neil Murray adopted a design almost identical to that of the facade of the Olympia Theatre, when he took over the premises in 1958. Further up the road past the shop, is the hardware store building. 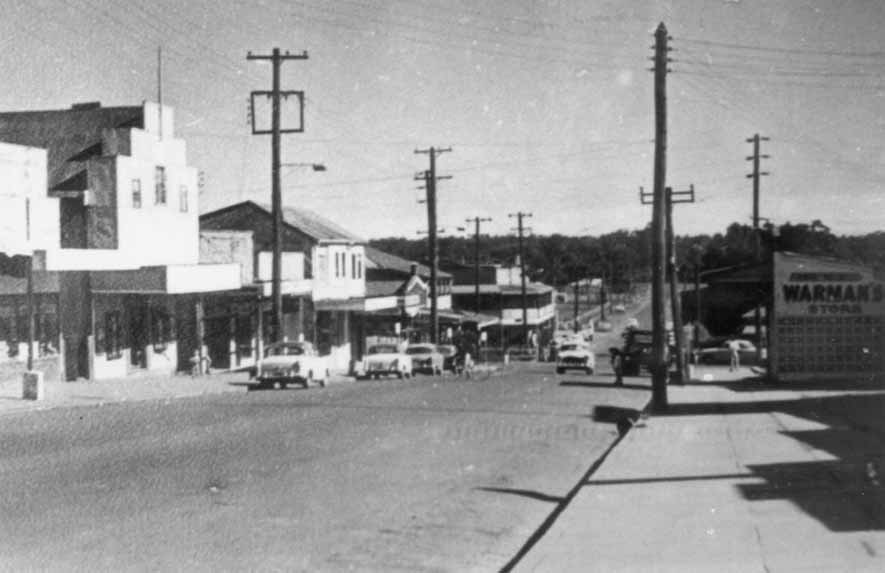 Looking South-East down Garfield Road -this photograph was taken in the afternoon of 1958. It clearly shows a portion of Neil Murray’s MFC Store, the front of the Olympia Theatre with all four glass show-cases, and the sliding glass door in place: then the Milk Bar, two other shops, the Wattle Milk Bar and Rosenthal’s shop on the corner. Across the railway line is the Royal Hotel. On the right side [northern side footpath] Warman’s Store is situated alongside of the hairdresser shop near the laneway. The parked cars on the left side of the street (south) are 1958 Holden Special Sedans with another coming up the road.This photograph was taken by Verlie Sullivan [Mick Sullivan was her father] then of Riverstone during late in 1958. 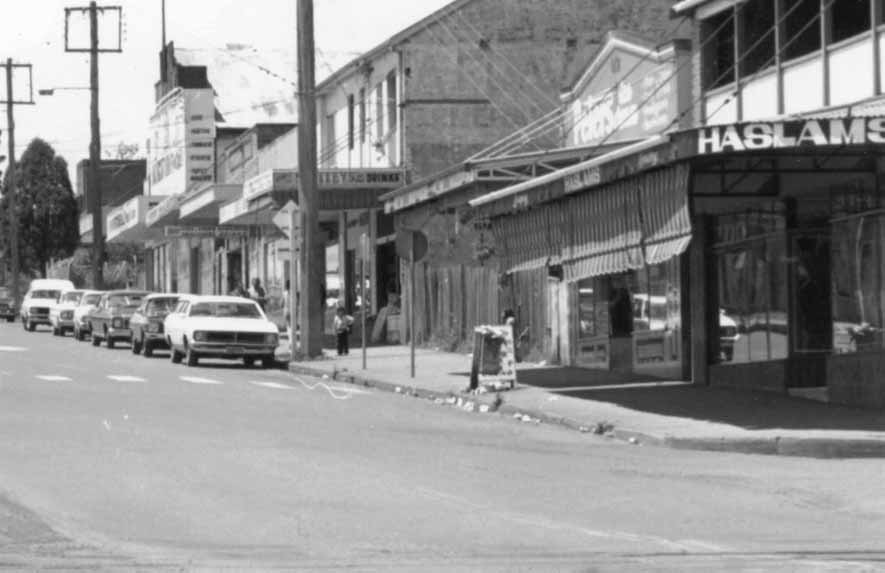 In this photograph, we are looking directly to the east along Garfield Road at Riverstone from the intersection of Railway Terrace at Haslam’s Store [formerly Rothenthal’s]. Past this store on the right is the Wattle Milk Bar, the hit shop, the “Blue Bird” Cafe, the Olympia Theatre building which at the time was being used by Michael and Freda Danziger of Rosebay, who had converted it into a commercial premises where auctions etc. were held. Beyond the Picture Theatre is Neil Murray’s MFC Store and the Riverstone Hardware. Directly across the road [northern side] is the Riverstone Post Office on the corner of Garfield Road and Pitt Street. This was the second photograph taken by Neville Biddle of Riverstone during the middle of the day in 1974.

Early 1978 -looking south across Garfield Road, this photograph shows the now dilapidated and falling down Olympia Theatre building with sheets of tile board/masonite and fibro either missing or falling away from the studs. The front awning is close to collapsing onto the roadway. After closing, the building had been used for a few years for commercial purposes. It was during this time, and due to the lack of maintenance and upkeep, that the building deteriorated. It became more noticeable during 1977. About mid- 1978 the Olympia Theatre was demolished alter having stood as a Riverstone landmark for 58 years. It might be noted, that at the lower right-hand side of the sheet missing from the facade, the word “Theatre” can be seen on the original old facade, through the timber frame. Whilst on the left side where another portion has fallen off, the word “A” can be seen near “AUC”- [Auction]. This was the end of the word “Olympia”. The word “Picture” is still covered with the tileboard, where the Projection Room was located -spells out “Olympia Picture Theatre”. 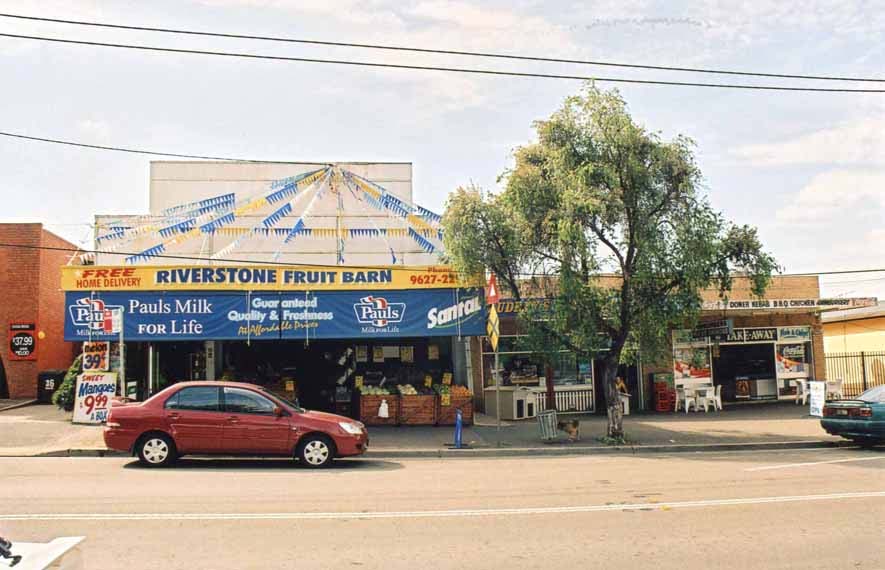 Today, a pet shop -produce and saddlery and a take-away cafe stands on the site where the Olympia Theatre once majestically stood. [Bottom] Site showing where Neil Murray’s MFC Store was located [now the Riverstone Fruit Barn] and where his Olympia Theatre once stood next-door.

This layout of the Olympia Theatre Riverstone is not to scale. It is as recalled by the last Projectionist -Alan Strachan, and was prepared on 9th September, 2000. The layout shows the stage area with the old screen of fibrolite positioned behind the Cinemascope screen, main and two side speakers, curtains, curtain motor, and door to the stage on right. Also the stalls and dress circle. The number of seating arrangement may not be correct, as there were many changes made over the years. The Projection Room also appears in the layout.

The Windsor & Richmond Gazette of Friday 29mJune, 1934, describes the “Back To Riverstone” Ball which was held within the Olympia Theatre Riverstone on Friday night the 22″ June, 1934 -It is estimated that just on 350 people attended the “Back to Riverstone” Ball which was one of the most enjoyable social events of last week’s celebrations at that centre. The function was held in the Olympia Theatre on Friday night, and as a result of the effort it is expected that a goodly sum will be raised. The interior of the hall was nicely decorated with streamers, coloured electric lights, balloons and greenery, and presented a pretty appearance. Those responsible for the decorations were the ladies committee, comprising Mrs Ray Vaughan (President), Mrs Steer (Secretary), and Mesdames V. J. East, A. Smith, A. S. Jeffery, A Gordon, W. Vaughan, Sid. Turner, R. Hurley, J. Robbins, W. Piper and H. Bambridge. Mr. Tom Freeman’s orchestra played excellent music, whilst the duties of M. C. were carried out by Messrs. Ray Vaughan and P. Mason. With such a large crowd on the floor dancing, at times, was most uncomfortable, but no one seemed to mind -it was ‘Back to Riverstone” Week and everyone entered into the spirit of the evening. Among those present were quite a number of former residents, and they were accorded a right royal welcome back to the township. Supper was served in the Oddfellows’ Hall, the catering being in the capable hands of Mrs Curl of Windsor. Mr B. R. Hibbert had charge of the box-office, whilst Messrs. W. Parsons and S. Simmons were the door-keepers at the dance hall. Messrs. J. Wall and Dillon, Senr., had charge of the door at the supper room. So well did everyone enjoy themselves that when Mr Fisher mounted the stage, at the request of a few, and inquired whether it was desired to continue on with the function, the decision was a unanimous one. It was well into the wee small hours of the morning [Saturday] -3 a.m. to be exact -when the ball concluded, everyone being thoroughly satisfied with the night’s enjoyment and voted it one of the most enjoyable and successful functions of the celebrations.

So diversified was the programme at the “Back to Riverstone” Carnival that every section of the community was catered for -even His Majesty the Baby! The Baby Show held in the Olympia Theatre on Friday afternoon [22″rd June, 1934] was one of the outstanding and most pleasing features of the festivities. The hall was filled with mothers and babies -32 of them to be exact, ranging from 9 to 18 months of the girls and boys sections. Ribbons bearing the inscription, “Back To Riverstone Carnival” were placed around the neck of each winning baby by Cr. Page, President of Blacktown Shire Council.

To this very day [2005], Mrs Nancy (Strachan) Anderson, still resides in Riverstone, and has very fond memories of the occasion when she was crowned the “Queen” in the Olympia Theatre Riverstone. -“Long Live The Queen”.