1932 The Formation Of Riverstone Vigoro Club.

The following item appeared in the Windsor & Richmond Gazette on 19 August, 1932:

A week later Riverstone had played a friendly game against Windsor at Riverstone Sports’ Ground. Windsor won. The return match, played on Saturday 27 August, on Windsor’s ground was won by Riverstone. The paper reported:

In 1932 the following teams were named in the Gazette but the competition appears to have been purely social: Riverstone Country Life, Schofields Boomerangs, Cattai Rovers, Vineyard Blue Birds, Windsor Checkers and Blacktown.

1933 A District Vigoro Association is Formed.

At a meeting at the Olympia Theatre, Riverstone, on 24 January 1933 a Vigoro Association was formed in the Hawkesbury, with competition to begin on 4 February. Five well-balanced clubs made up the competition. They were: Riverstone Country Life, Schofields Boomerangs, Vineyard Blue Birds, Cattai Rovers, Windsor Checkers.

At the end of the first round, on 10 March, Riverstone and Vineyard were leading the competition on 24 points apiece. New names to appear in results published in the Gazette were: D. Keegan (Riverstone), P. Becker and 0.Alderton (Schofields) and D. Alcom and J. Schoffel (Vineyard).

Nancy Anderson (Strachan), a member of the Riverstone team, was interviewed by her great grand-daughter, Holly Stone, for this article. She remembers her uniform as being a maroon dress with white on it. As part of the uniform they also wore white sandshoes and white caps. They practised twice a week and their coach was Harry Davis.

Nancy also recalls that it cost a penny to play and a bingo team raised money. The Gazette recorded fund raising dances at both Riverstone and Vineyard. The Riverstone function was held in the Olympia Theatre and was in aid of the district association. The Vineyard dance “under the auspices of the Blue Birds Vigoro Club was held on Saturday evening, the funds benefiting to the extent of £4”.

An Interdistrict Game was held over the Easter weekend between Hawkesbury and Cumberland. Two teams from the Hawkesbury played in the morning and in the afternoon Cumberland defeated Hawkesbury by an innings and 14 runs. The Hawkesbury team was: B. Rabey, A. Fletcher, F. Russell, E. Overton, G. Stanford, G. Thompson, 0. Gill, E. Brown, Lorna and Lola Mitchell, Z. Douglass and E. Wilson.

A second interdistrict game between Hawkesbury and Pals (Parramatta) was played at Riverstone in June. Parramatta winning by 12 runs, scoring 47 and 61, with B. Rabey taking 5 for 10 and E. Brown 8 for 23, and Hawkesbury scoring 44 and 52 with Lola Mitchell and E. Wiggins each getting 13 runs.

Social activities obviously played an important part in team morale as witnessed by this report in the Schofields News section of the Gazette on 19 May, 1933.

At about the same time, 2 June, headlines blared:

Apparently Schofields won the 1933 Competition and Knockout Competition, a matter which was not recorded in the Gazette and for which the paper was criticised by Mr Rabey. This promoted the Gazette to reply:

Transport to the Games.

Transport to the games must have been a problem as Mr Ronald B. Walker M.L.A., on behalf of the Hawkesbury District Vigoro Association,

The reply was prompt, and Mr Walker was advised by the Commissioner that

Jean Cubitt (nee Wood) recalls travelling to vigoro matches in the back of Jess Goodwin’s truck. She tells of driving home through Pin Town where the fruit from orchards was hanging over the fence. Some of the girls picked some fruit and they ate it. On arriving back at Riverstone and stopping at “Conway’s Corner” (the intersection of Garfield Road and Riverstone Parade) they found the local constable awaiting their return. He had a complaint from a farmer about the girls “stealing” his fruit. “Be on your way, and don’t let it happen again!” was the warning.

Dick Stacey provided the transport on the back of his truck also, especially when the girls were going to dances in other districts. Dick’s band was usually playing for the dance. Jean remembers going across to Penrith on the back of Dick’s truck for a Vigoro Ball and being billeted by the Penrith team for a night.

On 28 July it was reported that:

In Vinyard News on 25 August it was reported that:

Mr Rabey vs the Gazette cont’d:

The Gazette correspondent was not going to forgive Mr Rabey of Schofields for his earlier complaint. The following appeared on 18 August:

This intriguing paragraph in Riverstone News leaves one wondering as to the identity of “Pop”:

Teams in the new competition were: Country Life I and II, Blue Bird, Boomerang, Don’t Worry Club, Old Gold, Sunshine (Pitt Town), Cheerio, Rovers (Cattai) and White Flash. Miss Joyce Woods enthusiastic secretary of the Country Life Club drew praise from the Gazette for her contributions of the draw and point score. (So there Mr Rabey!)

Country Life I was the leading team in the 1933 summer competition. They apparently held their own also against teams from outside the district. In a Sunday match at Riverstone they defeated Marrickville Strollers by 89 runs. The Strollers made 40 & 25. Country Life 1 replied with 14 & 140.

Country Life won by an innings and 27 runs! At the same time Country Life II were soundly beaten by the Boomerangs by 163 runs with B. Rabey taking 5 for 3 and E. Overton 2 for 7. New members for each of the teams were O. Willis and S. Martin for Country Life II and D. Field for Blue Birds.

A Monster Sports’ Meeting for the Hawkesbury District Vigoro Association was held at the Riverstone Sports’ Ground on Saturday 18 November. (One expects “Pop” was an enthusiastic spectator at the grand march past of vigoro teams at 3:00 p.m.) The weather was poor and the function was not the success anticipated and the full program was not carried out owing to wet weather. The following results makes one wonder what could possibly have been omitted! 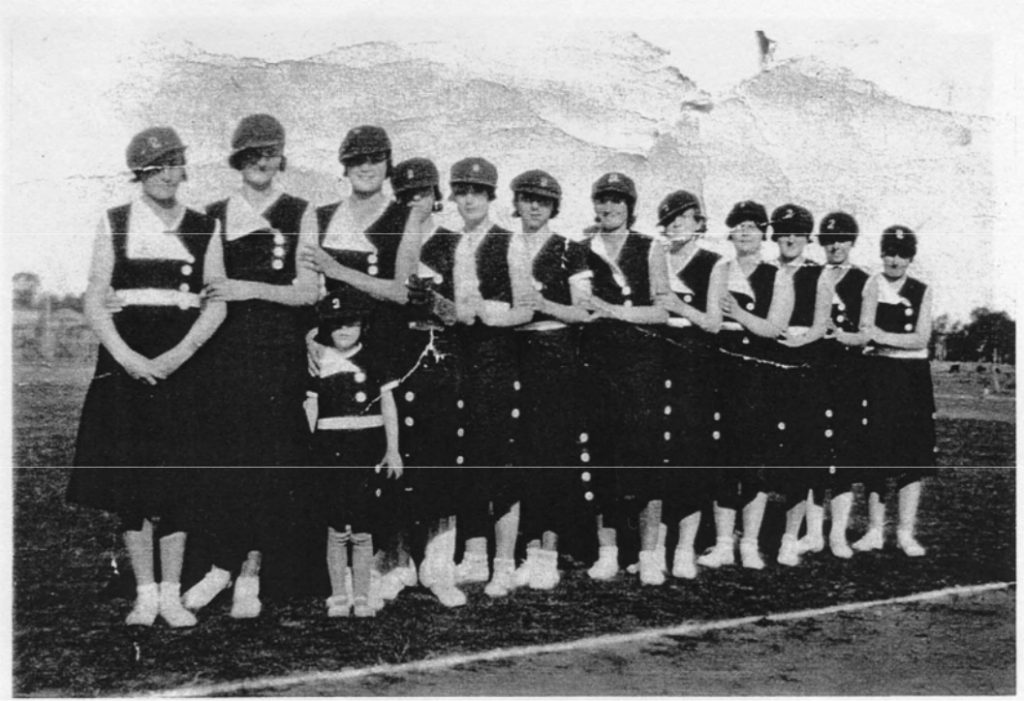