When I was growing up, I spent many hours listening to my grandmother and great aunts telling stories of the family and Riverstone in the ‘old days’. One name that was often fondly mentioned was that of Sister Barnes. With the assistance of Karen Matzen, Dr William Muston and an article on the Barnes Family by Ronald McWilliams, I have been able to put together this article.

Muriel Augusta Barnes was born in 1880. Following her mother’s death in 1922, she moved from Grafton to Sydney, where she enrolled at the Royal North Shore Hospital as a trainee obstetric nurse. After completing a one year course, she purchased an obstetrics hospital at Willoughby. This was not a success and in 1926 she purchased an established hospital at Riverstone.

The 1926 Electoral roll lists “Barnes, Muriel Augusta, Ennisluan, Garfield Road, Riverstone, nurse”. Ennisluan was the name of the maternity hospital. It was located in the building which now houses Dr Longworth and Dr Dixon. It was originally constructed as a house and was left much the same during its time as a hospital.

The hospital had originally been established by Nurse Barnes, who we understand was no relation to Sister Barnes. The Gazette of 29 November 1925 recorded that Nurse Barnes relinquishes her position to go to Canberra.

Sister Barnes was full of energy. She not only ran the local maternity hospital, she undertook nursing private patients at their homes, was a tireless worker for the local Church of England and an active member of the local Country Womens Association.

Lyndia Brookes recalled Sister Barnes in an interview with Sam Lane in 1983: I was mentioning about the hospital. There was a Sister Barnes, she came before I moved to Riverstone. It was at the present Doctor’s place in Main Street. Nearly all the children were born in the hospital, or she looked after them and visited you at home. Four guineas a week to be in hospital. She looked after you, stayed with you all the time you were having your baby, you had your meals there and everything was done for you. … She’d tell you things, what to do, you’d go back later and get the baby weighed.

She was a busy person, made jams, she did tatting, fancy work and knitting. She never married. She used to do smocking. The last baby I had was nearly the last baby she attended. A couple of months later she was ill and had to give it up. She sent me a beautiful white crepe de chine dress with all the pink smocking on it for my daughter… I used to correspond with her for a long while after, but she fell ill and then passed on.

Mrs Brookes mentions the cost of attending the hospital. There was no Medicare in those days and all medical treatment had to be paid for, often in advance.

When my Grandmother was in Sister Barnes hospital during the Depression, my Grandfather had to travel to Windsor to the bank to get the money to pay the bills. After the birth of her last child, Grandma underwent an operation at the hospital and remained there for three weeks. The operation was carried out by the local doctor, with assistance from Sister Barnes.

Grandma recalled that the hospital had a verandah at the front and several other rooms or ‘wards’. There was one private or single room. It cost extra, but it was regarded as something special or prestigious to be able to get this room.

Sister Barnes was an early example of a ‘multi skilled’ worker. It was normal to see her walking around the hospital, checking on people, giving advice whilst carrying a baby in each arm. Sister Barnes delivered babies, but she also knew when to call in the local doctor for deliveries.

My great aunt, Hazel Rumery held Sister Barnes in high regard. When her brother George was seriously injured in a motorbike accident, his mother and sisters looked after him during the day and Sister Barnes came to look after him at night.

Sister Barnes was also a fellow member of the Church of England. Aunty Hazel recalled her singing in the choir and hearing her singing as she walked home from church of a Sunday evening.

In 1934 the Gazette reported that Sister Barnes was on holidays at Kurrajong Heights1 and later in the year that she had undergone an operation in a Sydney hospital.2

In 1935 a local fund raising Auxiliary was formed in connection with the Windsor Hospital. Mrs Ray Vaughan was elected to the chair and Mesdames Steer, W. Andrews and Sister Barnes were elected Vice Presidents.3

Sister Barnes also found time to garden, and in the results of C.W.A. Flowers and Old Treasures and Modern Handicrafts Show in 1936, Sister Barnes is listed as having won an award for her roses.4

In 1940, Sister Barnes suffered ill health. The Gazette of 2 February 1940 mentioned that she was suffering from shock following a burning accident to her foot. Several weeks later the Gazette recorded, Sister Barnes making slow progress and that she was obliged to enter St Luke’s Private Hospital Darlinghurst for skilled treatment.5

In the edition of 9 August 1940 the Gazette reported Sister M. A. Barnes is overjoyed with a cable received this week saying that her sister and brother-in-law, the Rev. & Mrs McWilliams who have been abroad for the past two years are due to arrive in Australia on August 15th… Accompanied by son Ronald, post graduate course at Cambridge and daughter Fanny, .. studying in France. Prior to departure, Mrs McWilliams was the French mistress at S.C.E.G.G.S.

Sister Barnes never married. In his book on the Barnes family, her nephew Ronald McWilliams recorded that she had an attachment to an interesting but tragic young man who was greatly attracted to her. He was the local Anglican Vicar of the Parish of Copmanhurst by the name of W. G. Froomes. At the time he was twenty eight and Muriel was twenty four. Sadly in 1904 he drowned while swimming in the Clarence River.

Ronald described Muriel as follows: It is true to say that she had many accomplishments. In addition to playing tennis (and playing it ably), cooking and nursing skills already mentioned, she sang well, taking an alto part with precision and was a great church worker and became a well known identity in the country town, as it was, of Riverstone. Although her formal nursing training was strictly midwifery only, many minor ailments and injuries were treated by her at Ennisluan. The townspeople looked to her in time of need – usually medical need, but not always. Ronald went on to give an example that demonstrated that she had a logical mind. She assisted the local well digger to calculate the volume of a particular shaped well, so that he could quote a price on digging it based on

the amount of earth removed. Sister Barnes’ method would have resulted in an answer that was within 5% of the technically correct method.

On 5 September 1941 the Gazette advised that Sister Barnes, who is retiring from business will be greatly missed from the various bodies in which she has taken an active part during the 15 or 16 years residence here. The Church of England and C.W.A. branch in particular will lose a sincere worker. The Gazette of 19 September1941 reported on a farewell to Sister Barnes by the Mother’s Union at which they presented her with a reading lamp.

The paper also recorded details of the upcoming auction of the property: 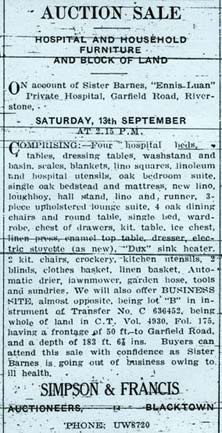 Sister Barnes retired to Burwood, where she lived with her sister Gladys. Sister Barnes died on 11 July 1952. An obituary appeared in an unnamed newspaper in 1952 which stated: Hers was a life completely of service to others.