As told to Rosemary Phillis

I started playing golf when my children were little. At the time I played the piano for dances at Blacktown. The men in the group formed a little golf club and they used to go to the Parramatta Golf Range to practice. I went with them and they encouraged me to have a go. I wanted to play left handed as that is how I played cricket and vigoro, but they said I had to play right handed so I did.

My husband Gordon and one of my sons, Ross used to go out to a small nine hole course at Rouse Hill and play socially.

I then joined Richmond Golf club. Richmond is a good course as it is nice and flat. After some time they convinced me to become Secretary, which I did for five years. I didn’t know what was involved at the start, but the lady who was Secretary before me was very helpful. I travelled to Richmond by train, taking my clubs and buggy. Eventually I got a locker at the club and was able to leave my clubs there.

I only owned one set of golf clubs. They were second hand when I bought them. I didn’t have a full set, just the main ones, a putter, driver and 3, 5 and 7 irons. Towards the end the driver was looking a little worn. The clubs have changed now; they are so much bigger, the drivers are massive.

Along with others from Richmond, we travelled to other courses including Manly, Rydalmere, Leura, Springwood and Camden. Once a year a group of us travelled to Orange for a week. We played golf and had a look around the area.

Gordon, Ross and I even played in Queenstown when we went to New Zealand. I still remember the time we played at Leura when the weather changed and it started to rain. It was freezing cold and after that I didn’t play in the rain.

We didn’t have a club uniform, you wore what you liked. Sometimes we might have a shirt with a name on it.

The prize cards I have from Richmond date from 1983 through to 2000. Around 1990 my husband Gordon became very ill and I had to give golf away to care for him. After he died I went back to playing at Richmond. I enjoyed the social side of things and it was good exercise.

I made some good friends, Dot Levick, Margaret Fennell and Heath Topping. We still go out to lunch together and Dot calls around for a chat of a Saturday. Others who I recall playing who came from Riverstone included George White and Dawn Wells. 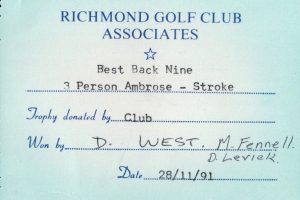 Jean McPherson was another who was at the club. She was a hard worker for Richmond Legacy and she encouraged me to join Legacy.

I didn’t have lessons except for one day when Billy Dunk (a professional who sometimes played at Fox Hills) offered to give the women there a lesson. Apart from that I practiced by playing.

Except for Rouse Hill I always played the full 18 holes. I won a few trophies (Author note: I counted eight proudly displayed on a shelf.) I also won other prizes that were donated by people including a handbag, set of canisters and a blanket amongst other things.

I enjoyed the drive off the tee and seeing how far I could hit the ball. I didn’t so much like when I got closer to the green as it was harder. I had to make sure I didn’t over hit the green.

Although I didn’t drive a car, I could drive a golf buggy and for the last two years I played I shared a cart with my friend Dot. We made the most of the social side of things, while Dot went around the course. I used to take the biscuits and she’d take the coffee.

I do think the best two sports are tennis and golf. They are clean sports and I enjoyed playing them both.

Doreen West – Memories of Golf in the District Download