by The Counter family 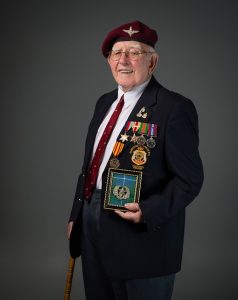 This is a brief story compiled by the Counter family from information passed on by their father, Joe, and from documents discovered when he moved from his Riverstone home in August this year after 50 years. He was a devoted husband and father of five, a proud Australian, a proud Mancunian and Ex Serviceman. He was an enthusiastic fundraiser and committed community worker, an honest and hardworking man.

Joe Counter was born in September 1921 close to the banks of the River Mersey in Cheadle, Cheshire, England, the sixth born of nine children. From the age of 12 he worked part time on paper rounds by foot, bread rounds on a bicycle and a fruit round on a horse and cart. At age 14 he left school and went to work in a local cotton mill, taking on a job that required a small boy to work in a narrow confined space 4.26 metres deep. At age 16 he lost that job as he had grown too big to enter the confined space. He then worked as a delivery van boy, a labourer in a felt hat factory and then in a wallpaper shop cutting the ends off paper rolls.

He enlisted in the Cameronians (Scottish Rifles) on 26th July 1938. Like many young men seeking adventure, Joe lied about his age stating he was 18 when he was actually 17. He served in France from September 1939 and was evacuated to England from Dunkirk as part of Operation Dynamo in June, 1940. Joe volunteered for the Airborne Forces and qualified as a military parachutist in August 1942. He was posted to B Company, the 3rd Parachute Battalion.

In November 1942, he flew from R.A.F. St Eval in Cornwall to North Africa via Gibraltar as part of the 1st Army participating in Operation Torch. On 12th November the 3rd Battalion captured the German airfield at Bone in Tunisia. This was the first British Army battalion level parachute operation. Unfortunately Joe was taken as a prisoner of war six days later on 18th

November. Following his capture he was held at several Prisoner of War camps in Italy, Austria and Germany until liberated by the Ninth American Army on 11th April 1945. He was demobbed from the Army in June 1946. During the war years he became fluent in French, German and Italian and to this day is still able to converse in those languages. Soon after the end of the war he married Pattie, (also known as Pat or Patricia) and moved from the North of England to the coastal town of Bognor Regis in Sussex, where Pattie was born and brought up. By 1953 Joe and Pat had five children Graham, Chris, Richard, Gillian and Sally.

In 1951, in what appears to be the start of a lifetime of community service, Joe joined the Royal and Ancient Order of Buffalos (RAOB) and stayed an active member until 1961. In August 1953 he was persuaded to become Secretary of his local football club, the Aldwick Wednesdays, which was in danger of closing because of a lack of administrative help. The same year he helped arrange an official street party in Bognor to celebrate the Queen’s Coronation.

Also in 1953 he became a regular blood donor and continued donating until 1990. In 1956 he joined the Bognor Regis Amateur Operatic Society, singing in every annual production until 1963.

In 1957 the local 10th Bognor Scout Troop was operating at full capacity with no opportunity for his sons to join. He led a group of parents in the formation of a new troop, 1st South Bersted, that are still in operation. 1963 saw him fundraising for the 2351 Bognor Squadron of the Air Training Corps where his sons trained.

In 1966 Joe and Pat became disillusioned when the United Kingdom was trying to join the European Union and thought that Australia offered the family a better future. They applied for and were accepted by Australia to immigrate to New South Wales. The family, apart from Graham, left England by ship in December 1966, arriving in Sydney on 2nd January 1967. They were housed initially at the Bradfield Park Migrant Hostel at Lane Cove. Within a couple of weeks a school friend of Pat’s, Joy Burton and her husband Ron from Riverstone, arranged for Pat and Joe to inspect a house for rent in Grace Avenue. They moved in the following week, eventually buying the property.

In January 1967 Joe joined the Riverstone Schofields RSL Sub Branch and will celebrate 50 years of membership next January. Following a term as Secretary, he was elected Welfare Officer in 2005 and actively held the position until his resignation in 2015 at the age of 93.

Joe worked at the Riverstone Meat Works as a clerk in the Engineers Office between 1969 and 1973. During that time he was involved in the running of the Foremen’s Social Club, helping in the organization of numerous functions held mostly at the Riverstone Bowling Club.

In 1968 the Riverstone Ladies Soccer team was formed by Joe under the umbrella of the Riverstone/Schofields Soccer Club. He took on the position of Manager/Coach and later served as President of the club. The ladies team played others from Green Valley, Bass Hill, Mt Druitt, Penrith and St George.

Around the same time a committee was formed by some of the residents of Grace Avenue and Dingle Street to monitor the vacant land at the end of Grace Avenue, known as Ridgeview Park. Joe was a member of the group that saw the park expanded by Blacktown Council then vastly improved with help from funds raised by the group.

In 1972 Joe became a Charter Member of the Riverstone and District Lions Club. During his 16 year membership he held at various times the position of Secretary, Bulletin Editor, Vice President, President and Zone Chairman. He was presented with numerous Lions Club awards during his time with the club. He was an avid fundraiser spending almost every Friday night during his long term membership helping with the chook raffles at either the Tourmaline Hotel at Vineyard or The James Ruse Hotel at Rouse Hill.

In 1974 Joe commenced work at the Sydney Opera House as a Payroll Officer. He worked at the enviable front window of a narrow office overlooking the Harbour. He worked there until his retirement in 1985 at age 60. He was cautioned at one time by the General Manager, Frank Barnes, for spending more time looking after the Social Club than actually working. Joe has never disputed that comment.

In 1977 Joe joined the Masonic Royal Prince Lodge in Riverstone, leaving in 1992.

In 1984 and for six years, he coached boy’s junior teams for the Riverstone/Schofields Soccer Club.

In 1986 Pat joined the Floral Art Section of the Royal Horticultural Society (RHS) and remained a member for over 24 years, spending over 15 years in an executive position on the Committee which met at Beecroft. Joe was a keen helper and fundraiser for the group during this time. Pat was made a Life Member of the RHS in 2004.

In 1990 Joe and Pat joined what is now known as The Macquarie Towns Garden Club. They were members for over 20 years, Pat as President for ten years and Joe as Treasurer for at least five. During their time in office, they arranged two bus trips each year for the Club, as well as the annual fund raising stall held in Windsor Mall. The proceeds were always donated to local organizations.

In 1991 Pat and Joe joined what was to become The NSW Floral Art Association which met in regional New South Wales. Pat held an executive position for at least 17 years while Joe helped with the fundraising. He was invited to become a Patron in 2003, a position he still holds.

In 1994 Joe took up landscape oil painting at evening college in Windsor.

On 5th May 1996 Joe and Pat’s youngest son Richard (Rick) sadly passed away in Schofields aged 45.

In 2005 Joe became a Justice of the Peace for New South Wales.

In 2007 Joe was one of the committee formed by Blacktown Council to choose a new name for Riverstone Park, subsequently named Basil Andrews Playing Fields. He was also at some time part of the community forum considering the electrification/duplication of the local railway line.

In 2008 Joe travelled to France with a group to attend the inaugural Anzac Day Service being held on the Western Front at the Australian War Memorial in Villiers Bretonneux. He laid a wreath on behalf of the New South Wales Head Office of the RSL and laid poppies on the graves of two Riverstone men killed in WW1. He also visited the grave of his uncle, Thomas Albert Counter killed 12.2.1917 aged 19. At the end of the trip he visited Dunkirk for the first time since 1940. He walked the beach possibly hoping to wipe away 68 years of recurrent nightmares that he continues to have.

In 2010 Joe was able to advise the local Girl Guides on ways to fund raise their way back into operation following a period of closure.

Between 2008 and 2012 he concentrated on his RSL Sub Branch Welfare Officer’s work, the New South Wales Floral Art Association, the Macquarie Towns Garden Club and the Floral Art Section of the Royal Horticultural Society.

In 2012, after 64 years of marriage, Patricia suddenly and sadly passed away. Joe continued to live at home at Grace Ave for the next four years, strong and healthy and taking a great interest in the affairs of his now large extended family.

During their life together he and Pat travelled extensively within Australia and overseas. They were great ambassadors for the town of Riverstone, the State of New South Wales and for Australia.

Recent family history research has revealed that Joe had family links to Australia way before he arrived. George Metcalf, a first cousin twice removed, was a quarry labourer who was taken prisoner by Ned Kelly and his gang in June 1880 and held hostage at the Glenrowan Hotel. George was subsequently shot in the eye during the siege and shootout with police and died as a result of his injury on 15th October 1880. Joe would no doubt have made much of his link to Australia’s past had he known about this sad occurrence years ago.

Joe is now 95 years old and living at the BUPA Aged Care Facility in North Rocks. In typical fashion, he is keen to organize the setting up of a club of one sort or another and of course, as he always has been, happy to help with fundraising if required.