Since I wrote the article on “German Charlie” in the Marsden Park Public School’s 1989 Centenary Booklet people have been asking me if I had the full story of German Charlie’s life – well here it is!

I have chosen to reproduce most of the information as it was written then, in the Windsor andRichmond Gazette, starting with Vol.1 No. 1 on 21st July 1888-1891. Researched at Windsor Library. I loved reading “Riverstone” from our Correspondent and from Truthful James and hope you enjoy their “take” of the times as much as I did. The collected information is not strictly collected in the order as it was written in the Gazette.

Sincere thanks to Cecil Bull, Beth Matthews and Brenda Gardiner from Parramatta Historical Society for their information on German Charlie’s life after Marsden Park.

From the Riverstone Correspondent (July 1888):

The township is presently as lively as can be. Hundreds of visitors from all parts of the colony visit it weekly to consult German Charlie or, as he is most commonly known, Doctor Charlie, upon various complaints.

“German Charlie – a Sketch of the Riverstone Medicine Man”

“Some are born great, Some achieve greatness, Some have greatness thrust upon them – under the last category comes the subject of the Sketch, and his worldly success shows, in a remarkable manner, how Fortune knocked at his door and found him at home.

German Charlie, or to speak correctly, Heinrich Frederick Bruggman, native of Hamburg in Germany, and, although some of his disciples now claim for him miraculous powers, his boyhood life was dull enough, and may be summed up as a monotonous repetition in daily form of the ‘got up, washed, went to bed order’.

As a young man he had a penchant for doctoring and longed to study medicine. Homeopathy, being within his reach, soon found in him an ardent discipline, and, to gain experience, he used to visit poorer classes in Hamburg and prescribe for their ailments ‘gratis’. He contracted a serious illness and, his money having run out, he decided to emigrate in 1883.

In 1888 he had been in the colony for five years, four years in the bush. He worked as a hawker, then as a bootblack. At the time he set up as a homeopath on the Blacktown Road at Marsden Park he was 54 years old. He was described as being about 5 ft 10 ins. in height, of rather stout build and his face wore a rather worn-out expression. Charlie had a full beard and wore a tweed suit, a slouch hat and slippers.

Charlie’s house is described as a step-up from a gunyah, surrounded by thick trees and shrubs. The scene brought to mind nearly 1900 years back, a scene in a far distant land by the Sea of Galilee, when a great multitude of sick came to Him. A profile of German Charlie in the 1891 Gazette said that his name was Charles Heinrich Frederick Bruggman but he is buried under the name of Carl Heinrich Frederick Bruggmann.”

German Charlie practised in Marsden Park from 1888 – 1891. German Charlie successfully treated a neighbour’s child and his reputation spread till he was seeing 400-500 people a week. His renown created a local demand for coaches, drivers, boarding house keepers and liars. Crowds of people come from all parts of the country. The railway station is quite lively and, when trains arrive, you would hear the coach drivers echo, “This way for German Charlie”. There were up to 13 licensed vehicles (and more expected) operating from Riverstone railway station to convey patients to Blacktown Road Marsden Park, with signs, “To German Charlies”. 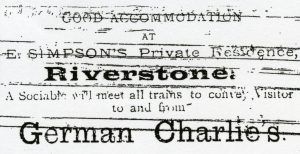 It cost 2/- (2 shillings) to see Charlie, 1/- (1 shilling) for advice and 1/- for medicine. As time went by the fare to get to Marsden Park rose from 6d. (6 pence) to 15/- , a quite large amount for the times. (This was also one of the reasons Charlie decided to move to a more accessible location for his patients.) Most journeys started at a hard gallop regardless of the passengers feelings – to get there fast was the aim. Towards the end of the journey the road narrows so that only one vehicle can pass and certainly drivers took risks to get there first. Some drivers zigzagged along this last stage of road where two vehicles could have passed at very close quarters, to stop drivers getting in first. With all the rushing about accidents did happen, ending in court.

From the Riverstone Correspondent (in the September issue):

“The road leading to German Charlie’s was being gravelled as it was badly wanted, as there is a deal of traffic upon it and it was terribly cut up.”

“It is amusing at times to see the lithe limbed visitors start off running in the direction of Charlie’s residence, rather than lose a few moments waiting for the carriage to leave. People may be met in the bush here, there, and everywhere, for the doctor’s house. A week or two ago several almost miraculous cures were made, and one lady from Wellington, who was suffering from a skin disease which none of the doctors who tried could cure, is just ready to go on her way rejoicing.

German Charlie continues to be the most eagerly sought after in Riverstone. Hundreds of people arrive in Riverstone from Sydney and all parts of the colony, camping near Charlie’s and domicile overnight, so they may have an early opportunity of seeing the medico next morning.

It is stated upon good authority that as much as £400 (pounds) circulates weekly in Riverstone outside of the usual local money spent in the town. This is due to the fact that German Charlie has his consulting rooms in the locality.

It is a well-known fact that Riverstone is the best paying station on the Windsor-Richmond line and yet the station accommodation is certainly the worst. Some agitation should be made by the residents to try and get what they require. Several of the Ministry had a trip to Riverstone and it is hoped that some benefit will accrue. The daily trains are crowded with visitors and hundreds are staying in town, if this goes on a train service like that on the suburban line will be necessary.

The consulting hours of German Charlie are a little conflicting… that he did not work on Saturday came out in court – another article stated that Wednesday is a day Charlie never sees patients. The Gazette reported that Charlie went on a visit to Gosford for several days. He was accompanied by his private secretary, and was met on his return at the railway station by a large number of residents, who, with one accord gave three cheers for ‘our German doctor’, whereat Charlie appeared to be exceptionally pleased. The town, usually so busy, was wonderfully different, but on Thursday, when Charlie worked, the town was again inundated with visitors, the lame, the halt (crippled) and the blind all being well represented. The locals were looking to having the trains fumigated with all the sick people coming to town. One lady had come from Rockhampton in Queensland for no other purpose than to obtain his advice and medicine.

Charlie also saw emergencies, one such example was the case of a horse tripping whilst transporting a child, throwing him heavily. The child, of course, progressed favourably. Several Sydney doctors have come from time to time out of mere curiosity, others with the object of discovering whether Charlie was capable of curing some ailments, which all the ability of their brethren and themselves had failed to remove. Two well-known metropolitan doctors of high standing in particular arrived at Charlie’s some weeks ago and one of them managed to gain admission. He stood before Charlie and said, “Can you do anything for me?” Charlie gave him one sharp, shrewd glare and curtly replied, “No!” “Why?” asked the Sydney medico. “Because there is nothing the matter with you” was the answer and the inquisitive one was fain to take it and his leave. His companion remained in the bus outside and when the first emerged from Charlie’s he was asked, “Well what do you think of him?” “He knows a lot more than I do,” said the other and they drove back to Riverstone again.

The stories of Charlie’s cures are really miraculous and the majority of those who put their faith in him and consult him are people whose ailments have been given up as incurable by qualified medical men.

On entering his consulting room the visitor stands face to face with the German ‘miracle worker’ who casts a quick glance over his patient, and, as he says, sees the whole system opened out before him. In a moment Charlie states the patient’s symptoms and places his hand upon the exact locality of the disorder. He sits down, buries his face in his hands for a moment, and then, rising hurriedly, runs his hand along the row of medicine bottles ranged on a shelf close by until he reaches that which he desires to use. People who visited him on more than one occasion state that on being consulted he trembles on all his limbs and remains in that condition until the patient has left.

One doctor who saw Charlie asked him whether he could not impart his knowledge to another, and, after a little consideration Charlie replied that he had thought the matter over but, somehow, he believed that it did not lie in his power to do so. The fame of the German doctor has reached the old country already and word has been received that three or four persons are on their way from America to consult him. Altogether Charlie has been a regular boon to the Riverstoneites who view his threat to leave the locality with little short of horror.”

He married Susan Griggs in 1890 in Parramatta and, in April 1891, he purchased a beautiful Victorian weatherboard cottage, no. 46 Station Street East, Harris Park. This house was built in 1879 but sadly demolished in 1969. The location was ideal, only 4-5 minutes walk from the station and 10 minutes from Parramatta. He charged 2/- per patient. It is said that many times he refused this sum to needy folk. It is also said he received large amounts of donations (mainly money) and he later returned these donations to his patients. In the floor of this house, in the middle of his kitchen, there was a large trapdoor leading to a cellar by way of a ladder, where he stored his remedies, medicines, herbs, to keep them cool. He continued to work from here for the next 17 years, till death. The death of German Charlie occurred on 26th February 1908. He was 74 years old. He is buried in Mays Hill cemetery in Parramatta.

German Charlie was a phenomenal person in the Marsden Park/Riverstone, and then Parramatta/Colony before and after the turn of the century. His popularity was due to the successes of his treatment where local medicos had failed. It is difficult to ascertain how many people he saw in Harris Park, with easy access to his treatment.

During the short time we had him in Marsden Park/ Riverstone area health care was probably the best in the colony, testified by his popularity. As a result WE had a booming economy, improvements to roads etc. YES, we were the sorrier for his relocation.