When the High School celebrated its 30th Anniversary Lynette Walker put together a history of the first thirty years for the Pebble school magazine. It is worth sharing part of the story of how the announcement was made in 1960 that the school was to be built to open in 1962. As with many such announcements it was followed by Government inaction and much community agitation.

Finally, despite having had two years to build the school, construction started only five months before it opened. Needless to say it wasn’t finished on time, but there were enough classrooms to allow the school to be opened on 31 January 1962. Over the years more classrooms were added, followed by the library science block and auditorium.

Fifty years later the school buildings are still recognisable to former students, but inside the classrooms have changed. The blackboards have been replaced by whiteboards and interactive screens, where the teacher can project lessons from a computer onto a screen for everyone to see.

In the Music room acoustic guitars are suspended around the walls, but classes can now be done with the aid of iPads, not to mention the sound studio across the hallway.

The Industrial Arts rooms still house timber working tools and metal lathes, but one room is set up so that students can program their laptops to operate small Lego like robots.

Personal development classes now include access to life like baby dolls. Some can be programmed to be just like a real baby to give students a real world view of life with a baby.

The digital world has met up with the Art Department with a special computer room. Don’t worry though, there is still a darkroom for processing film and two rooms where students can physically apply paint onto canvas.

For many of us the positive aspects of our time at school were connected to the teachers and students with whom we spent our school years.

I attended Riverstone in the 1970s. We completed up to Year 12 at Riverstone, but had to travel to Blacktown Girls High to undertake the actual HSC exams. In later years students were able to sit exams at the school. 1999 was the last Year 12 completed at Riverstone. From 2000 onwards Year 12 students travel to Wyndham College at the old HMAS Nirimba site at Quakers Hill. Here students from Riverstone, Quakers Hill and Seven Hills High schools undertake both Years 11 and 12.
50 years was a significant enough milestone to celebrate with a school open day, so the current Principal, Alistair Yates advertised for interested community members and former students to attend a meeting to look to organise events for the celebrations.

An enthusiastic group of people met in the school library and sorted through ideas for the celebrations. Over the next twelve months the size of the organising committee dwindled, but the enthusiasm remained high. It was decided that the celebrations would consist of a display in the school to open on Friday and Saturday; an official ceremony and cutting of a cake on Saturday; open day in the classrooms on Saturday; a commemorative paver walkway followed up with an open day at the local Museum on the Sunday.

Michelle Nichols established a reunion site on Facebook and over a series of months many people became friends of the site and shared photos and memories.

A core band of volunteers, Ruth Tozer, Rosemary Phillis, Karen Stalker and Vikki Durrant sorted through mountains of paper accumulated over the years to find items and photographs that could be used as part of the display.

Alistair Yates, the current school Principal, lost some hours of sleep as he co-ordinated the numerous official things required to have the events running smoothly.

The school had good sets of class photos from most decades, so it was decided that the class photos would be scanned, numbered and put on display for the day. School staff including Damien Knott, Matt Saville, Lyndall West, Kellie Steel, Pauline Elder, Casey Brown, Janette Abrams, Karen Lawrence and Gillian Elliott provided support in the lead up to and on the days of the celebrations.

The display was to be a highlight of the event and it took two full days to put the display up and pull everything together. Karen, Vikki and Rosemary were joined by Sam Kirby, Sharon Hughes and Brooklyn Durrant to pin photos, arrange artefacts and items of interest.

Finally Friday arrived with the most unseasonable weather for October. It was raining and freezing cold. The Great Western Highway and Bells Line of Road were cut by snow. The visitors however were not to be deterred and drove through atrocious conditions. Over both days the visitors came from everywhere, the country, Queensland, South Australia, Victoria and Western Australia.

One of the most popular visitors on both days was Mr Ted Mulherin. He was a teacher at the school on day one in 1962. He recalled the day clearly. Our first day was pupil free as the school wasn’t finished. They were still sweeping out the classrooms and bringing the furniture in. The first buildings were where the canteen is now and the building adjoining it across the now quadrangle. They didn’t even know if the toilets would work and had brought in the old toilet pans in case they didn’t work.

There were no doors on the classrooms and it was Easter before I was able to move into my science lab for the first time. The site was still a construction zone and if it rained they had to put down timber for the students to be able to walk from one building to the other.

Mr Mulherin spent the two days catching up with his former students along with some of the other teachers from the early days including Myra Steyn, Bill Thompson, James McMillan and Joy Farley.

People stayed for hours in the hall on the Friday, looking at the display and catching up with friends. When closing time came, the last few people had to be hunted out with one of the old school canes, which had been found in a storage room under the stairwell near the Office.

Saturday saw a complete change of weather, sunny and warm. Perfect for a reunion.

Visitors flocked to the hall, signing the visitors book, checking out the displays and looking for people that they knew. The noise levels grew and the area became more and more crowded. The organisers were relieved!

The Office staff and family, along with Rosemary Godbehere, Sam Kirby, Vicki Durrant and her daughters, manned the school stall on the day, printing out copies for sale at request, raising funds for the current school projects.

The official events started at 11 o’clock on the Saturday morning. Alistair Yates was Master of Ceremonies. The National Anthem was sung in unison by the assembled crowd. Former teacher Deidre Dorbis conducted the Acknowledgment of Country, which was followed by speeches from Alistair Yates, Michelle Rowland, Kevin Connolly, Wal Smith and Ray Williams (Member of State Parliament and former student).

The official cake was made and iced by Jordan’s cake shop. It was adorned with a beautiful reproduction of the school emblem in icing made by former student Michelle Smith. The emblem is shown in the photo below. 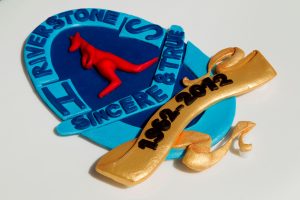 The official cutting of the cake was a combined effort. Former school leaders Joy Magennis (nee West) and Keith Musgrave and current school captains, Mikayla Tabone and Simon Godbehere together completed the official task, captured in the pictured below.

Another special feature associated with the celebrations was the construction of a Commemorative Pathway. In the months leading up to the event the school was taking orders for people who wished to have pavers included in the pathway. The official ribbon opening the pathway was cut by Karen Stalker (nee Keegan), a former student, School Captain, member of the P&C and mother of two former students.

No commemorative event would be complete without an official photo of the day. Local Professional Photographer and former student Warren Kirby took his camera to the second floor and took the official photograph looking down on the assembled crowd. The crowd was so big that he had to take several shots and digitally “stitch” them together into one shot. A fine record of the day.

After the official events were finished people dispersed. The open classrooms were popular and a credit to the teachers who had set them up to display modern day schooling for the event.

Throughout Saturday the hall and display remained a hub of activity and the school barbecue and canteen did a roaring trade supplying food and drink to the never ending crowd. 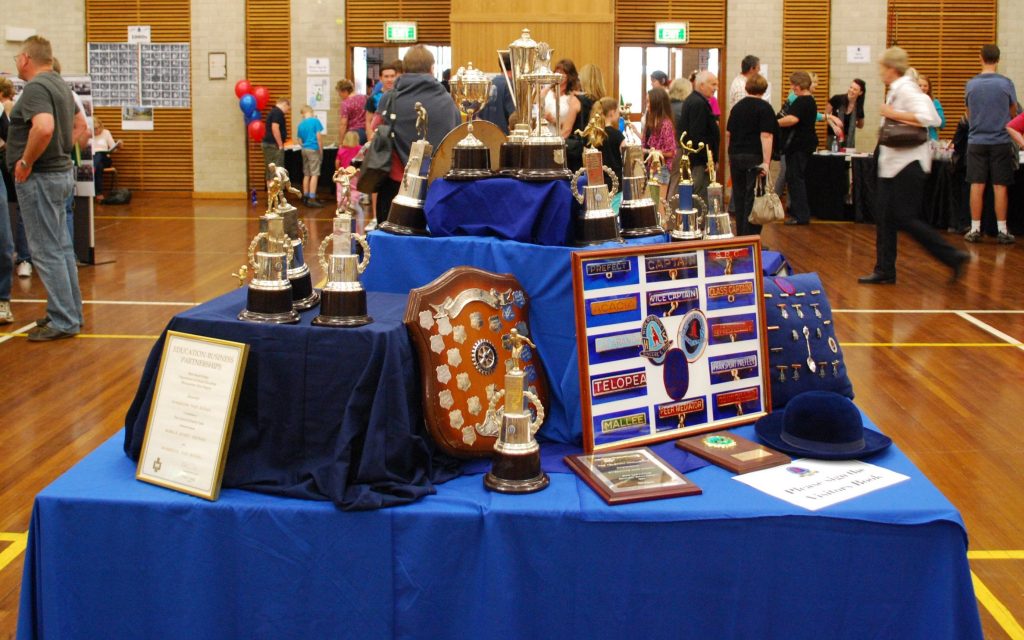 Time flew and eventually it was time to close up for the day. People were still looking and talking and eventually the Principal had to turn the lights out to have everyone move on. A great day.

To round off the day, a large crowd attended an impromptu get together on the Saturday evening. Organised by Leanne Leach about 200 hundred ex students descended on the Riverstone Bowling Club to spend more time with old friends. Everyone enjoyed reminiscing about their time at Riverstone High School and telling yarns of the ‘good old days’ and past experiences. Entertainment on the night was provided by The Flyze led by ex-students John Lewis, Chris Hoffman and Geoff Griffis. Some students met up at the Riverstone Schofields Memorial Club.

The Museum open day was a quiet event, but provided another opportunity for some of the students to catch up and gradually wind down.

Over the next few days the school received many expressions of thanks which were echoed on the Facebook site. The Riverstone High School 50th Anniversary celebrations will be remembered for years to come. 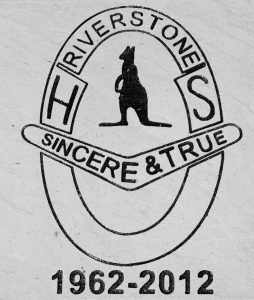