Born on the 3rd of March in 1867, Edward Vaughan grew up in Balmain. He was 17 when his family came to Riverstone around 1884. It is no exaggeration to say that he was one of our finest citizens. In his time he was referred to as the “Father of Riverstone” and “Daddy Vaughan”.

Known as Ted, his energy was limitless and for years he was involved in just about every community event and organisation. Some of his major contributions include:

Apart from running various organisations, Ted had a good singing voice and performed at many local events. He sang both serious and comic songs and was often applauded to perform an encore.

After a concert in Rouse Hill the reporter in the Gazette of 16 February 1895, wrote….Our genial friend, Ted Vaughan…, was in good voice, and was encored. This is his usual fate – all about here know a good song when they hear it – and are not satisfied, but, like little Oliver Twist, want more….

Ted played in a local cricket team. The Gazette in December 1889 listed him in the Riverstone second eleven which played against the Prospect second eleven. Ted scored two not out and took a catch to dismiss the top scoring Prospect batsman for 28.

Ted organised community and social events and if the snippet from the Gazette of 24 December 1892 is an indication, when Ted was involved, a good time was generally guaranteed. Mr E. Vaughan presided over a good meeting of those who intend journeying to Clydesdale on Boxing-day for a picnic. All arrangements have been made, and the pleasure-seekers will assemble at the Temperance Hall for a start between 9 and 10 that morning. Mr. Vaughan will be there, so they may expect plenty of fun.

The Oddfellows Lodge officially opened in the Riverstone Temperance Hall at Riverstone on Monday the 11 July 1892. Five months later the Gazette of 10 December reported Mr. E Vaughan has been elected secretary for the local Oddfellows’ Lodge, vice (sic) Mr. Bert Hibbert who resigned….It was the start of 57 years in the role of Secretary in the Lodge. Few people would be a member of an organisation for that length of time, let alone a major office bearer.

Ted was a District Grand Master for two years c1910. His work was recognised in 1910 when he was presented with an illuminated address and a suit of regalia by members of the Grand Lodge.

In 1896 Ted married Mary Matilda Dawson (known as Minnie) at St Paul’s. Prior to his wedding the teachers and pupils of St Paul’s Sunday School presented him with a marble clock, Bible, and an illuminated address, which read in part…. to show our appreciation of the whole hearted manner in which you have, for many years, held the position of Superintendent of the Sunday school. The regularity of your attendance and the great interest you have taken in the children, have been the means of encouraging both the teachers and children in their work.

Ted and Minnie had three children, Raymond (1897), William (1901) and Jack (1910). The family lived for years in a cottage in Wood Street. They lived in Riverstone for all of their married lives except in 1917, when they moved to Harris Park/Granville. They returned to Riverstone in 1918.

Ted worked in the grocery business. He worked for Charles Davis, collecting and delivering groceries. The Gazette of 22 June 1895 chronicled, Mr E Vaughan met with an accident one day last week. It appears he was delivering goods at the meat-works, when something startled the grey mare which he usually drives in the grocer’s cart…

The Gazette of 2 November 1907 had a brief note that Mr E. Vaughan is now employed at Mr H. Smith’s store. Both stores are shown in a postcard from around 1903.

His daughter-in-law Dorothy remembered that he worked for Tillocks Grocery Warehouse in Sydney, travelling on the 5.50 train every morning to the City.

Around 1922 he went into business with Lionel McCutcheon in a General Store located on the corner of Riverstone Parade and Market Streets in Riverstone. The store was purchased from Mr H. Smith.

Ted rode a pony named Roany around the district, collecting and delivering orders. Lionel McCutcheon spent his time serving customers in the shop. They employed locals to help out in the shop including Hector Alcorn, Dot Beazley and Jessie Schofield. Besides groceries they sold a little haberdashery, manchester, men’s and children’s wear.

From 1925 to 1929 Ted was elected as a Councillor on the Windsor Council. In the lead up to the election, a journalist at the Gazette on 4 December 1925 summarised his credential as follows:-

… A wise and intelligent man in the commercial life of the “Chicago of Australia he would make a good alderman. “Ted” Vaughan, as everyone calls him, is very popular in the town where he has spent many years of business activity. He is a prominent man in the Friendly Society work, and his well-known business acumen and good work in the interests of the public will secure for him a good measure of support at the election on Saturday.

Ted was the President of the Riverstone Public School Parents and Citizens Association from 1925 to 1935 and Vice President from 1931 to 1941. He would have continued, but the P&C disbanded for several years during World War 2. One of his major achievements was the establishment of a new school on the corner of Garfield Road and Piccadilly Street, which opened in 1929.

In 1929 Ted was appointed as a Justice of the Peace. He retired from Council the same year. During his time as an Alderman on Windsor Council, along with Aldermen Lawson and Rosenthal, he worked hard to have a water supply and electricity connected to the town. Their attempts through Windsor were unsuccessful, so they worked to sever ties with Windsor. Eventually Riverstone became part of the Blacktown Shire. This ultimately led to water and electricity arriving in 1933-34.

Such was the importance of the arrival of these services that a Committee formed to decide how best to celebrate the momentous events. According to Mr E. Crouch Sen. in a letter to the Gazette of 1 July 1953….A sum of £300 was raised, then land purchased for a park, and after fencing, etc, was completed the amount raised had totalled some £723 due largely to the efforts of the late Mr. Vaughan. I had the honour to work with him as organiser on that occasion. Yet not even a vote of thanks to him was recorded…..

Ted’s contributions to the Church of England were recognised when he was given the honour of switching on the newly installed electric light.

The Vaughan and McCutcheon business closed in 1933 owing to bad times and unpaid debts. Ted’s eldest son Ray had become a builder and constructed many substantial buildings in Riverstone and the district. In 1934 the Gazette advised We hear that Mr. Edward Vaughan…, intends to open up a cash and carry store in new premises being built in Garfield-road by his son, Mr. Ray Vaughan. The Gazette later reported: Mr. E. Vaughan is removing from Oxford-street next week-end to a new shop in Garfield-road where he intends opening up a grocery business. It is interesting to note that he would have been about 67 years old when he opened the shop!

The following advertisement shows that he sold more than groceries. 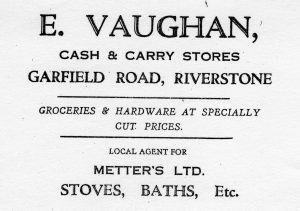 The mid 1930s saw Ted continue with his Lodge and Church work, as well as being a committee member on the 1937 and 1938 Riverstone Show Committees.

The war years were a sad time as his wife died in 1943 aged 70. The war did not stop his community involvement and in 1944 he obtained his St John’s Ambulance First Aid Certificate.

In 1950 Ted was presented with the Secretary’s Jewel. This was the first to be presented in the Cumberland District. The Gazette reporter wrote that at a special ceremony at the Riverstone Lodge of the M.U.I.O.O.F., that he had been financial Secretary since joining some 57 years earlier. At the gathering he was presented with a Secretary’s Jewel – the first presented by Cumberland District in more than 100 years. Bro. Clarke said, in his own personal tribute, that Bro. Vaughan’s books were “a credit to him” and “he not only works for the Lodge in this district, but for the Sunday School and the Church as a whole.” “There is not a man amongst us who is loved and respected more than Bro. Vaughan.” Bro. Clarke added. “Wherever his name is mentioned it is respected.”

Once Ted retired he kept busy. His daughter-in-law Dot recalled “he was active to the end of his life, helping people fill out forms and writing references for young people. He jokingly referred to himself as a ‘Philadelphia lawyer’ for all of the advice that he gave to people over the years”. Dot also recalls people referring to him as the “Father of Riverstone” or “Daddy Vaughan.”

Edward Vaughan passed away on 30 May 1953 aged 86. His obituary in the Gazette of 3 June 1953 read …A leading figure for very many years in public movements in his community, and in church and friendly society work, Mr. Vaughan was regarded in affectionate esteem by all who knew him…

Fittingly, Edward was buried in the Riverstone Cemetery, where he was a cemetery trustee from 1893, representing the Church of England until the last years of his life.

In a letter to the editor of the Gazette of 1 July 1953 edition, Mr E. Crouch called for subscriptions to “perpetuate the memory of the late Mr. Vaughan”. He likened Ted to two Prime Ministers, his letter read in part:- Sir, – Of late Australia has mourned the loss of two great men, the late J.B. Chiefly and the late W.M Hughes. Now we have the passing at Riverstone of that grand old man known and esteemed as “Ted” Vaughan – comparatively , in a more restricted sphere, as great as the two other men mentioned – after half a century in office in church work and as an officer of his lodge…..

The call for subscriptions grew and on 2 October 1955, a memorial service was held at St Paul’s Church of England where a brass tablet and bell reproduction system were dedicated to his honour.

The people of Riverstone owe much to Edward “Ted” Vaughan. He was a remarkable man and one of our finest citizens.