by Alan Strachan and Geoff Follett

Geoffrey Gordon Follett was born at “Ashmerton” Private Hospital at Junee 7th December 1934. His father, Ted Follett, was working as a drover at “Kiare”, a property near Bethunga. Prior to the family moving to Riverstone his father was working on “Carwoola” a property located on the Mongalo River between Queanbeyan and Captain’s Flat.

The family move to Riverstone in 1942 where Geoff attended Riverstone Primary School to year 6. He attended Parramatta Intermediate Boys High until October 1949 at the age of 14. He was employed by Coo-ee clothing company at their Parramatta store as a sales assistant for ten months, working five and a half days a week for £2.3.4 ($4.33) before joining the New South Wales Government Railways (N.S.W.G.R.) as a Junior Porter on 15 August 1950 when he was 15.

After two weeks training at Riverstone, he was appointed Junior Porter at Schofields, being paid 1/9 (18 cents) per hour. He worked a 12 day fortnight, 6 hour 40 minute shifts Monday to Saturday and 12 hours on Sunday with one hour meal break. He was paid 1/- (10 cents) a shift for being in charge of a station.

In August 1953 Geoff was drafted into National Service Training for three months at Holsworthy Military Camp. When he returned to the railways in November 1953 he took up a position as Relief Junior Porter until September 1955 when he was appointed Porter Class 1 at Westmead.

On Saturday 12th February, 1956 Geoff married Margaret Anne Norris at St. Paul’s Church at Riverstone, and they settled in Elizabeth Street. They celebrated 50 years of married bliss in 2006. 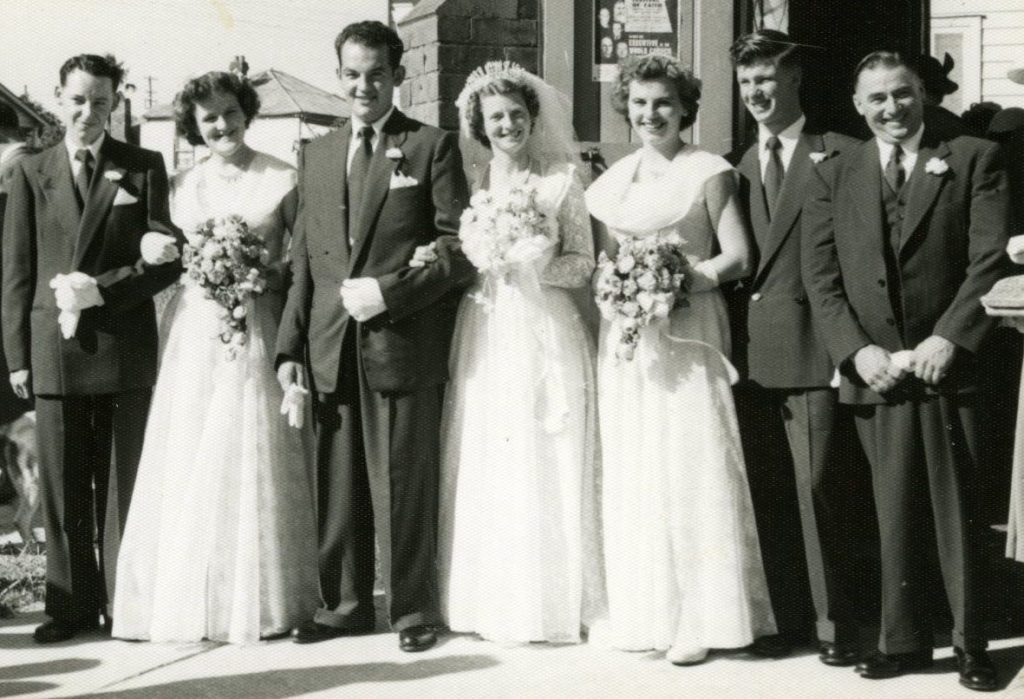 In May 1958 Geoff was appointed Safe Working Porter at Rooty Hill Signal Box. In June 1961 he transferred to Sydney Relief Safe working as a Station Assistant. During that time he worked at nearly every station in the Sydney Metropolitan Area in different aspects of the Traffic Branch. His roles included working as a number snatcher, telephone boy, call boy, flagman, assistant on Parcel Vans, parcels clerk, tour’s officer, goods officer, coaching clerk, booking officer, shunter and guard.

During his early days at Mulgrave, there was a large corrugated iron storage shed on the northern side of the station on the western side of Mulgrave Road where straw/hay arrived by rail for the mushroom growers in the area. There were grain silos nearby. The truck carriers at the time were Merv Bassingweith and Errol and Athol Miller from Pitt Town. Claude Dwight from Cowra purchased the hay and railed it from Cowra to Mulgrave for his brother Lance Dwight at Pitt Town. After working on the 4.30am to 12.30pm shift, Geoff went hay and wheat carting on the trucks to earn extra money to make ends meet.

He recalled that the floods were bad at Mulgrave, as the water from the South Creek would bank up and come up onto the railway line and surround the station. The station was actually a small island surrounded by a great expanse of water, and sometimes the platform went under.

Geoff recalls details of the time he worked at Mulgrave during the 1978 flood as follows: I went to work as normal and was able to get as far as Groves Avenue before I was stopped by the floodwater, (about where the emergency levee has now been constructed across the line). I left the car and walked up along the railway line to Mulgrave.

There was a Bridges Inspector and Locomotive Inspector at Mulgrave, waiting to check the bridge and locomotives when the water subsided. There was so much water, I rang to see if we could go home and was advised that we had to wait.

The water continued to rise. A local farmer had left a boat nearby, so I brought that up and tied it to the station. The water by this stage was surrounding the station and you could see the fish swimming around in it. After 16 hours we were finally allowed to go home. I rowed the boat back to where I had left the car, drove the others to Riverstone and went home.

After eight hours we were back at work again. As the water subsided the men went along the bridge and threw off the debris that had been caught on it. Those fellows deserve recognition for their work. Finally the bridge was inspected and declared safe and the trains were allowed to start again. All up I worked 32 out of 40 hours during that period.

Before a train could travel on a section of line, the driver had to obtain a staff from the Stationmaster. The photo below shows staff instruments at Mulgrave. The staff for a section would be strapped into the leather part of a cane sling such as the one hanging on the wall. The station officer would hold the sling in the air to be collected by a train passing into the next section, while collecting the one from the previous section. In the case of goods trains, they didn’t stop at the station and sometimes passed through at speed. Geoff recalled if the sling from the train was held the wrong way round you would be slapped in the back with the metal staff, which was extremely painful.

In the old days on the Richmond Branch Line, the Stationmaster at Mulgrave, and other stations, knew the regular train drivers and guards and nothing that was required to be done was a problem. `

Geoff clearly remembers the last day the steam trains ran on the Richmond Line in 1969. He was at Mulgrave that morning, when the passenger train made its run from Richmond to the city.

Whilst at Mulgrave, Geoff witnessed film productions. In 1967, the “Seekers” shot part of a television special. The “Beach Boys” rode BMX push-bikes along the line for a film segment, and the “Monkees” did a brief film stint. A night scene for the film “Silver City” about a woman from the Scheyville Migrant Camp was shot at Mulgrave. In real life, the migrants from the Scheyville Camp caught the train from Mulgrave as did the school children and the adults from Pitt Town.

The gravel/blue metal from the quarries near Richmond was used in the extension of the runway at Mascot Airport. The metal was taken by goods train from Richmond in Gravel Hoppers from the “Blue Metal Industries Siding” near Richmond Station.

Goods wagons unloaded at Mulgrave exceeded 1500 tonnes annually in 1966, gradually declining to 150 tonnes annually in 1990. Goods services were removed to make way for electrification. Interestingly when Geoff started at Mulgrave, for about three years the station was also the post office. The railways were paid for the use of the office, but the staff received no extra pay!

For the 125th Anniversary of the Richmond Line in 1989, the Vineyard railway station was decorated especially for the occasion by the residents, mostly from the nearby Windsor Retirement Village in Bandon Road. They let everyone know that they were proud of their station.

During his time with the railways, Geoff saw the change from steam to diesel to electric passenger and goods services. Other significant changes included the extension of electrification to Lithgow, Newcastle, Wollongong and Richmond, the opening of the Eastern Suburbs Railway and Circular Quay, along with the standard gauge to Melbourne and on to Perth. The introduction of electric passenger service from Richmond to the City saw a reduction of three to two services per hour.

Today, Geoff is in his 70s and he still resides at Riverstone with his wife, Margaret. He still has very fond memories of the district, and despite the changes over the years, still enjoys living in the town.