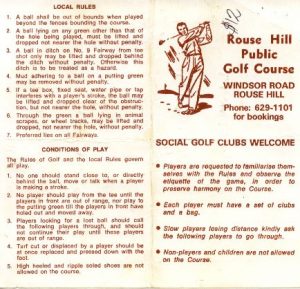 It is hard to imagine that the land on the Sydney side of the Rouse Hill Anglican Church centre and the shopping centre which now houses McDonalds, Red Rooster and Aldi, was once a quaint nine hole golf course, known as the Rouse Hill Public Golf Course. Indeed, by my estimation, Mile End Road runs along where the third and fourth fairways once lay.

The course was in operation from the 1950s when it was known as Braemar. Judith Lewis recalls that after she and her husband Kevin were married in 1958, they used to ride their pushbikes out from Riverstone, with their golf clubs on their backs.

In the late 1970s I learnt to play golf there as part of our High School interest elective afternoon. The school hired a bus that delivered students to a variety of places, including half a dozen of us to the golf course. Wendy Drummond and I were the only girls interested in playing and to avoid having the boys hit golf balls at us we usually let them tee off first. (Either that or we climbed through the fence, and started on the 3rd hole, you could do that sort of thing at Rouse Hill.)

It was a very basic course, set on the side of the hill; no bunkers and each of the fairways were pretty much straight up and down. The main challenge was on the seventh hole, a short hole, with a dam on the down side of a steep slope. If you didn’t land the ball on the green with your first shot, you either landed it in the dam with a splash or it rolled down the hill into the dam. As poor school students we couldn’t afford to lose balls, so sometimes we just ignored the hole and walked to the next one. An extendable ball scoop to retrieve balls from the mud later proved to be a wise investment.

Other hazards included swooping crows that stole golf balls and the maintenance man and his tractor/slasher who chopped up many a ball as he mowed the fairways. He had a tin full of replacement balls and if he ran over your ball, and you yelled loudly enough, he’d stop and throw you a replacement one. If he didn’t hear you it was tough luck. (We often wondered if his three legged fox terrier dog had moved too close to the slasher at some stage.)

The absolute killer was the times of the year when the course was fertilised with chicken manure and other unidentifiable material. The smell was enough to give you an asthma attack.

There was a small shop where you paid your fees and could purchase a drink. You could hire a buggy, no electric ride ons, just a basic metal framed one that looked like a preying mantis and if you were lucky there was a piece of rope attached to tie your golf bag on with.

There were toilets, long tin sheds with tables inside and barbecues and some beautiful eucalypt trees, restful places for recuperating after nine holes, especially in the heat of summer.

Despite the basic nature of the course and facilities I really loved it. Rouse Hill Public was a great place to learn to play golf, had a wonderful atmosphere and holds very fond memories for myself and many others. It was the scene of many local derbies and if you want to read about one of these, look up the article by Chris Counter in our 2006 Journal.