At our Society’s final meeting for 2005 the topic of articles for our 2006 Journal was raised. The suggestion was made that it might be time to write something about the Meatworks’ fires. In the discussion that followed it became evident that the fatal fire of Thursday, October 8th 1970 was still a sensitive issue within the community. The comment was made that it was a shame that no memorial had ever been erected to honour the six men who were tragically killed in that fire. We decided that the Historical Society would try to rectify this.

Our first objective was to attempt to contact families of the six men to gauge their feelings, as we didn’t want to cause any further angst. Two families lived locally and they were happy with our plans. We sought the assistance of the Riverstone and District Lions’ Club and the Riverstone-Schofields Memorial Club and their support was superb. Wally Smith from the Lions’ Club took over all the technical aspects of the project – liaising with Blacktown City Council, obtaining quotes and arranging for the purchase and erection of the memorial plaque and accompanying storyboard. Matthew Dawson, Geoff Hunter and the Board of Directors of the Memorial Club agreed to fully fund the project. The Historical Society had the task of locating and keeping contact with the families of the six men, wording the memorial plaque, planning the storyboard and organising the programme for the unveiling of the memorial.

Excellent publicity and support from the Sydney Daily Telegraph and local papers enabled us to eventually make contact with all six families who were most supportive of our plans. Despite great support from all sections of the community, including one former resident, who having read the “In Search” article in the Daily Telegraph made a sizable donation towards our costs, the project was undoubtedly the most challenging our Society has faced. The Historical Society was deeply appreciative of the generous support received from Council, Lions Club, Memorial Club and the many people who made contact with offers of help in locating the families.

It was therefore most gratifying to see so many community members, past and present, in attendance when the unveiling ceremony took place on Sunday, 8th October 2006. Our society’s aim had always been to make the Unveiling Ceremony for the families of the six men, so we steered clear of inviting other official guests. We were therefore very pleased to have local State and Federal Members of Parliament, John Aquilina and Louise Markus, and local Councillors, Ron Alder, Allan Green and Alan Pendleton, show their support by their attendance.

The Memorial Service was most fittingly conducted by Peter Filmer, from Blacktown City Council. Peter is the grandson of Peter Steele, foreman of the Stores’ Department at the Meatworks for many years and, at one time, resident in Butchers Row. Steven Winter, studying to become a minister of religion, represented the Riverstone Ministers’ Fraternal. He offered a thoughtful, moving prayer. Mayor Leo Kelly, making an excellent speech, unveiled the plaque and storyboard. Families laid wreaths at the stone which would later bear the plaque. Then the large crowd mingled, enjoyed the Lions’ Club barbecue, visited the Museum and its Meatworks’ Display and/or adjourned to the Memorial Club where morning tea was provided, free of charge, by the Club.

The latter read as follows:-

On 29th July 1970 a fire at night in the Skin shed, a three-storey building constructed from timber, demolished all but the ironbark posts from the bush at Jericho (a dairy near the Richmond Road in the Meatworks’ property). Over 3000 sheep and 500 pigs died in the inferno and all the skins stored in the Skin shed were destroyed.

On Thursday 8th October 1970 fire started in the old freezer building on the other side of where the sheep were being held. After the earlier fire there was criticism from some quarters that more should have been done to save the animals, though, with the ferocity of the fire, that would have been extremely difficult. Reacting to this criticism, a number of men tried to herd the sheep to safety.

As fire hoses were played on the brick wall between the freezers and where the sheep were being held the wall collapsed, killing six men and burying a number of others. In the hours that followed men risked their lives working frantically, with no thought of their own safety, to find those who were missing. Two men, Edward ‘Ted’ Follett and Henry ‘Pat’ Leslie were found alive, taken to hospital, and later recovered.

A coronial inquest delivered an open verdict on the deaths of the men. The Royal Society for the Prevention of Cruelty to Animals presented posthumous medals to the men’s families in recognition of their bravery.

The inside pages of the Unveiling Ceremony Programme contained photographs and information on the six men who were killed. They were:-

Leslie Chapman aged 50, of Nelson. He was husband of Valerie Helena, father of John Stephen, father-in-law of Merle Catherine and grandfather of Stephen Frederick.

Percy Fotheringham aged 42, of Wilberforce. He was husband of Roma, father of Pam, Stephen, Wendy, Kerry, Narelle, Neil and Paul.

Raymond Palmer aged 30, of Schofields. He was husband of Beverley, father of Wayne, David, Donna and Kelly, son of Addie and Harold, brother of Alan and Shirley.

Slawko Puzny aged 20, of Riverstone. He was the son of Bogdan and Lucia, younger brother of Bob, Helen and Marie, older brother of Ola, Michael, Veronica, Lila and Lucy.

Jacobus van der Donk aged 16, of South Windsor. He was the son of Lambertus (Bert) and Femia, younger brother of Adrian and Hans. Jackie was a keen sportsman who played competition cricket and rugby league.

Noel Wallace aged 42, of Riverstone. Head Supervisor of the Mutton Board, he was the husband of Peggy, father of Brian, John, Peter, David, Robert, Ian, Ross and Kerrilyn Mary and grandfather of Colin Noel Wallace.

Peggy Wallace has kindly shared her memories of that time for this year’s Journal.

One night after work, following the first fire, Noel took Peggy to the charred Skin Shed. He told her, “I will never forget the cries of the pigs being burnt alive.” When the second fire began Noel was one of several workers, who had been enjoying an after-work drink at the Riverstone Bowling Club, who raced back to help the sheep being held penned ready for the next day’s slaughter. Peggy said, “I knew why he went in and did everything he could to let the sheep out.”
She recalls, “I was sitting on the veranda waiting for Noel to ring me and say, as he always did, ‘Bring down the chariot (our Holden)’. Then the sirens began and I saw smoke everywhere. I didn’t know what was going on. Some smoke went up in a mushroom. That would’ve been when the wall went down. I didn’t know Noel was in there, but from then on all I did was hope and pray.”
Noel’s body was the last pulled from the wreckage, shortly before 10pm.

It is the Society’s hope that, sometime in the future, something will be done to commemorate the site of the Riverstone Meatworks which was the life-blood of this community for over 120 years. 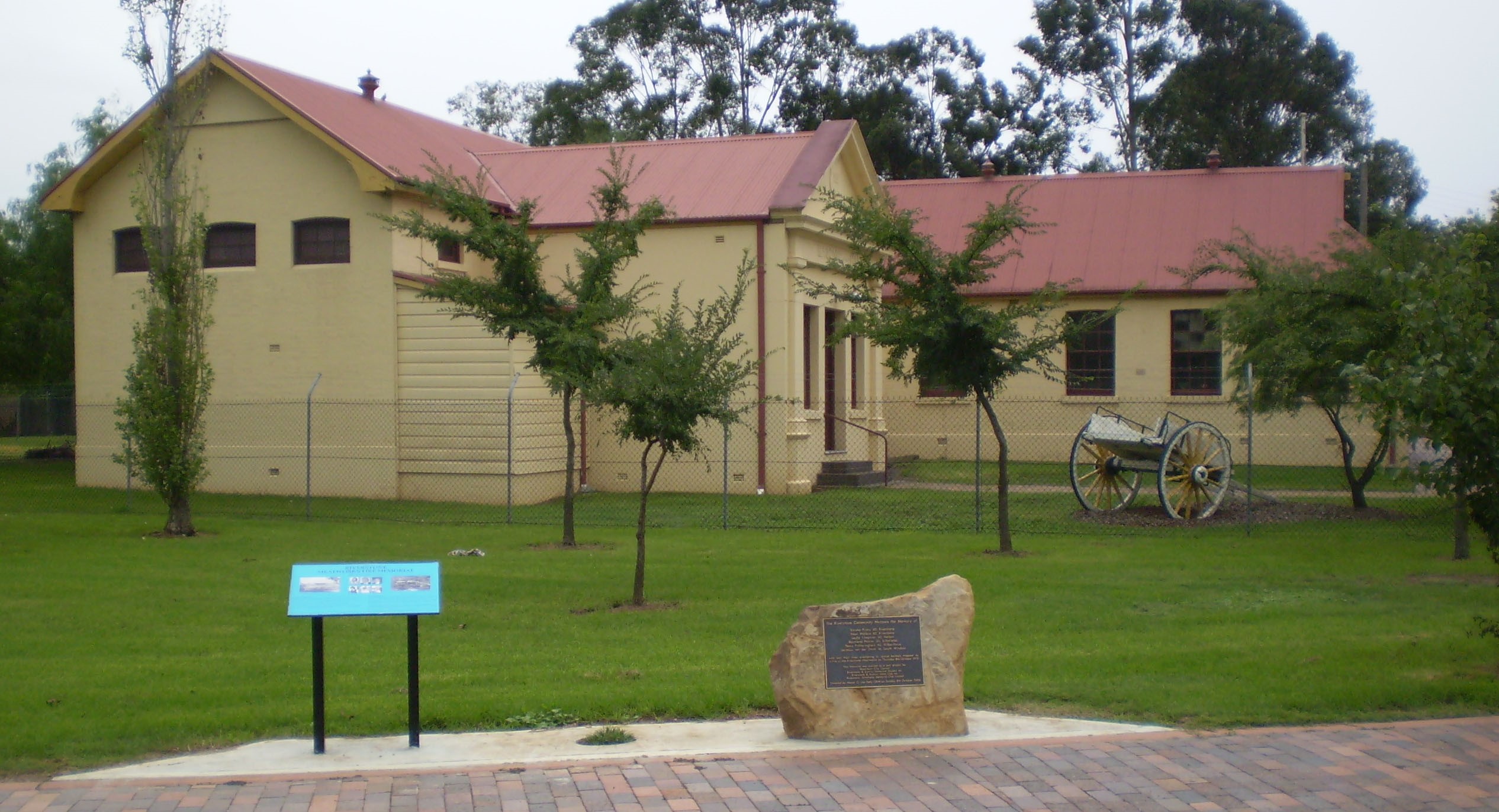