Compiled from an article by Lyn Cole

John Cole was born in Concord in 1928. John left school at the age of 15 and began work with the NSW Government railways, as a “Shop Boy”. Over the following years, John followed a number of occupations but when he trained with Roger Patterson and obtained his bus licence, he developed a love of buses that became part of his life forever.

In 1959 John attempted to purchase the Hawkesbury Valley Bus Service. He missed out, but placed an advertisement in “Truck and Bus” to purchase a Bus Run and the reply came from Mr Laurie Bower of Riverstone Bus Service, Riverstone. The business consisted of a rent free depot, which was located in Garfield Road (diagonally across from the Doctor’s surgery), in consideration of the purchase of all fuels through Laurie Bower. Also included were two buses, one Ford and one Oldsmobile that had been smashed and Laurie agreed to purchase a Lend Lease Chevrolet Bus. Full payment was completed within a five year period.

John commenced his dream on 7 November 1960. During the early years John worked a poultry farm together with his parents, Harry and Evelyn and wife Daphne, at Granville. John would share his time between the Farm and the Bus Service, in between school runs each day and then continue the township/Marsden Park runs until after 7pm at night.

In the early days of operation, prior to the Cole family making the move to Riverstone, the Notaras family, who owned and operated the Wattle Milk Bar, supported John and made sure he always had food provided during his long days away from his family. Between trips, either around the township of Riverstone or Marsden Park, John would be very well provided for by the family and he acknowledges the support given to him as the beginning of a true family feeling he came to have for both Riverstone and its residents.

During the first two days of his arrival John met with three people who remained part of his life, Ron Shields, who together with his family became an integral part of the Cole family and Riverstone Bus Service Pty Ltd; Aub James and his family. (Aub was always there to assist with repairs to the buses); Lyn Buchan, who worked for Laurie Bower and later became John’s second wife in 1979.

The Cole family moved to Riverstone in 1963 and 1964 saw the purchase of their first new bus, purchased from John A. Gilbert. It was a Pressed Metal body built on a Bedford SB Chassis.

Times were tough in 1965. The business employed five full time staff apart from family members and John found it necessary to work nightshift at the Villawood Textiles at Riverstone to meet the cost of the men’s wages. Sleep was minimal during that time, as during the day it was necessary for him to drive school buses in the morning and the afternoon prior to commencing nightshift.

In December 1966, the Cole family moved into a home built on the new Bus Depot property at 26 Wellington Street, Riverstone. The property was later extended to encompass land in Hobart Street. 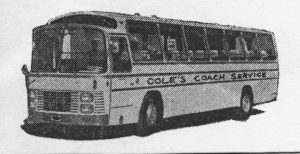 1969 saw an employee, Lew Stokes, transferred with a Coach Contract for Transtours work. This business was purchased from Tony Royle (Forrest Coachlines) and began the coaches known as Jetline Coaches, the name being registered that year. At its peak the company operated six coaches.

One of the weekend trips was to Falls Creek in Victoria during the snow season, for the cost of $13.50 a trip. These trips had to be interstate, as the law at that time did not permit such trips in New South Wales. John was a pioneer in giving the people of Riverstone a new service.

Coaches operated through Central Australia on a semi regular basis and these camping trips (Shiralee Tours) were enjoyed by all who ventured into the wilderness on them.

The Bus service, in and around the Riverstone district, was a valuable mode of transport and many friendships were born out of those trips and many happy times were spent by people just talking to the bus drivers at the stops. The Wattle Milk Bar Bus stop was a great place to see people chatting happily, both inside “The Wattle” and outside on the seat provided by Council.

The pot holes in the roads decreased somewhat over the years when Blacktown Council began to tar the roads. It was common courtesy to blow your horn as you entered a pot-hole in case a mini-minor was entering from the other side! The Council received constant encouragement from the Bus Proprietor to improve the roads.

During times of flood it was not uncommon for the schools to contact John to provide early transport home for the children who lived in the areas that would become “cut-off” from the township. The grader provided by Blacktown Council for roadwork in the area was known to have cleared the water for the School bus so that it could fulfill the service. It was most unlikely that any child ever missed being taken home to their parents just because there was floodwater. John would see to that.

1976 saw the extension of the Bus Service, when the Sunnyholt Road, Blacktown area was extended to include Riverstone. Riverstone and Blacktown were now linked by a daily bus service commencing at 5.30am each weekday morning and returning around 7.30pm.

At the peak in the 1970s there were approximately twenty five buses and coaches and at the sale of the business on 18 September 1984, to Rowes Bus Service, there were seventeen.

Railway breakdowns/late running would see Jetline Coaches/buses transporting people from Richmond to Blacktown regularly. The Company supplied Railway buses in between school hours in the 70s to allow for electrification of the railway line.

Buses were provided free of charge for the Sunday School run to St Paul’s Church of England at Riverstone for many years.

The McCall Garden Colony residents, enjoyed many a trip on the buses. During street parades, “Jetline Coaches” would be seen in the parade with “the boys” aboard laughing and cheering.

The patrons who attended the Olympia Theatre in Riverstone could always rely on the buses to pick them up and return them home safely.

The Cole family took great pleasure in assisting John to fulfill his dream to own and operate a Bus Service. It was with great pleasure they watched it become an integral part of the township of Riverstone.

Our thanks to John and Lyn Cole for the information for this article. More detail about the bus service is available at the Bicentennial Museum.