On 28 April 2007, at a special ceremony at the Riverstone Football field, people gathered to watch the unveiling of a plaque commemorating the official naming of the playing fields at Riverstone after Basil Andrews. Basil was a long term supporter of Rugby League in Riverstone and the district. As our President reflected later, “It was a fitting tribute to a lovely man”. We thought that the following obituary would provide a picture of the man and why it is so fitting that the playing fields are now named after him.

This obituary, written by Bobby Lewis, assistant Secretary of the Riverstone Football Club, appeared in the Riverstone Press when Basil passed away in September 1971.

The sudden and tragic death of Basil Andrews recently has taken from the Riverstone community one of its best loved and most respected members. His unselfish and tireless devotion to any task he undertook endeared him to all who came in contact with him, and a measure of the popularity and respect in which he was held was seen at the church service and in the funeral procession.

As well as personal mourners, representatives of all local Junior League clubs were in attendance, as were members from clubs in the Parramatta Junior League and Penrith District Club.

In his lifetime Basil had been associated with many organisations to which he gave that unswerving loyalty and attention that became his trademark, but perhaps the most lasting memorial to his name will be the time and effort he gave to the Riverstone Rugby League.

At the age of 16 he was a delegate to the Western Districts Junior League, he was a member of Riverstone’s premiership winning side prior to the outbreak of World War 2, and was a reserve for the Presidents Cup side that year.

At the outbreak of war he enlisted in the A.I.F. and served with distinction throughout the war. Even while serving overseas he never lost his love for Riverstone League, and donated a trophy to be competed for by young footballers in his town, still playing the game.

On his discharge from the Services he returned straight back to the community and the Riverstone Junior League, and here began an unbroken run of 25 years of dedication and work for the club.

For almost all of those years he was Secretary and was always on the executive side of the committee. For the 2 years that Riverstone amalgamated with Richmond he was their Treasurer, and on the return of Riverstone as a single club he became their Secretary again, a position he held until his untimely death.

It can be said that all the footballers in Riverstone since the War (and there have been many good ones), have passed through Basil’s hands. He was a quiet and unassuming man who seemed to bring out the best in anyone associated with him, either as a player or a fellow committeeman.

Throughout the lean years when Riverstone was struggling to field sides, Basil was almost a one man army. With the help of a few others, he held the club together, raising money one way or another to help keep the club on an even footing until they weathered the storm.

He was also an instigator of the fielding of smaller grade sides in the town and in the beginning he not only arranged transport for them to the various grounds, but he helped coach them as well.

I think he would have been proud to know that the funeral cortege passed through a guard of honour of young footballers wearing their blazers or jumpers in the colours he loved, and knew so well. In recent years while not enjoying the best of health, he still kept an unflagging interest in these younger players just as he did the senior sides.

Recognition of his work came to him in his later life. He was a life member of the Riverstone Rugby League Club and through his lifetime of work fostering and encouraging the game of Rugby League he was made the first Life Member of the Penrith Junior Rugby League, an achievement of which he and all League followers can be justly proud.

To me, Basil Andrews stood for all that was fine and decent in this world and certainly Riverstone is all the poorer for his passing. Generous to a fault, he was intensely proud of his town and his country, Through his unassuming ways he had a host of friends, and I was honoured to be among them.

His death not only leaves a gap which is irreplaceable, it leaves many of us without wise counsel and a true friend. From this can be said of Basil, to live on in the hearts of those we left is not to die. 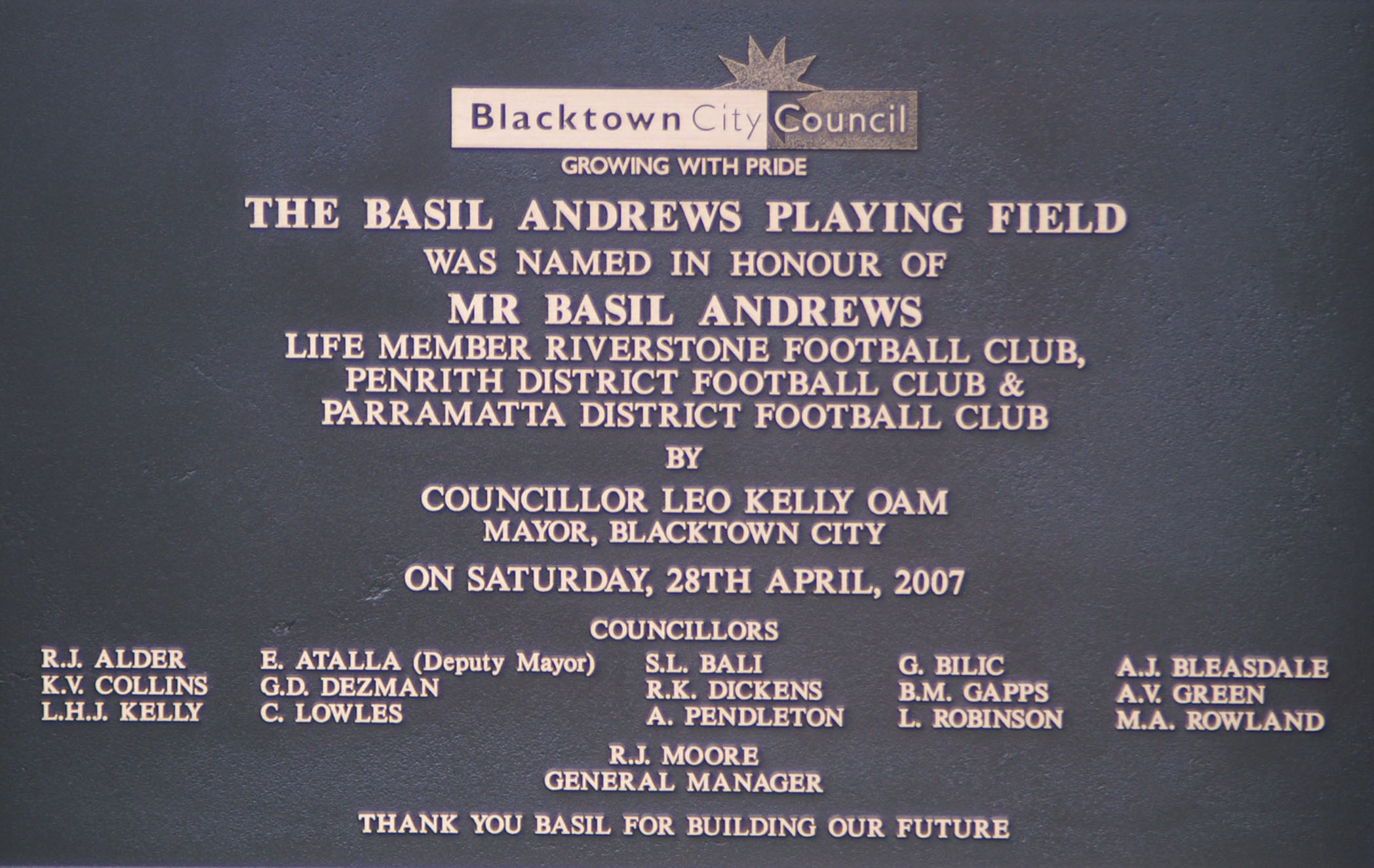