From the Windsor & Richmond Gazette, Saturday, 3 February 1900.
A RIVERSTONE INDUSTRY

During a recent visit to Riverstone we looked in at Mr H. J. Williams’ smithy. In addition to the blacksmithing business, Mr Williams goes in for the wheelwright’s business, and we had often heard of the good vehicles he turns out.

He does tyring work on a new plan of his own invention, which undoubtedly possesses many advantages over the old system. The platform is a cast iron plate 3 inches thick and 7 feet across. As soon as the heated tyre is put on the wheel, the platform is flooded by means of an ingenious device. A large square box is by means of a lever sunk into a pit filled with water, which flows over on to the platform, the water supply coming from a brick tank 10 x 12.

There is no smoke or charring of the wheel as under the old plan, and we were informed that a tyre 3½ in. x 1½ in. can be put on without any inconvenience in the way of smoke, or any damage being done by burning. Mr Williams pointed out to us the frame of a cart which hung in his shop. It has been there four years without paint, varnish or oil, and it is impossible now to see where the joints went together.

One of the best spring carts in the district is that which was turned out of this establishment for Mr James Ouvrier. This is said by competent judges to be a fine piece of workmanship. Seven new drays have recently been turned out for Mr Ouvrier and one for his brother, Mr John Ouvrier, of Windsor, and they are admitted to be as good as anything in the country.

Messrs James Kilnane and W. Fitzgerald have sulkies made at Williams’ factory which would be a credit to any tradesman, and we heard of another of his sulkies which has been running for seven years without having the tyres cut.

Horse-shoeing is also a branch of the business, and in this line, too, Mr Williams is a competent tradesman. In fact there is no manner of work in the trade of blacksmithing, wheelwrighting, and painting vehicles that he cannot do, and such a good all-round tradesman deserves to be patronized. 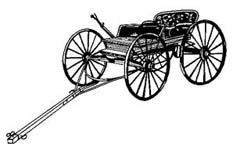